Where does Ireland fit in Europe now? 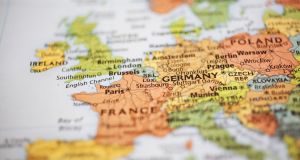 Going into the economic crisis, Ireland shared many characteristics with the south on debt and bailouts, even though its export-led growth model is more northern.

How compatible are their various models of capitalism and associated approaches to political integration? Will they be able to survive together in a deeper EU with a common set of rules? Where does Ireland fit in?

Northwestern Europe brings together the developed democracies and co-ordinated market capitalisms of Germany, Belgium, Luxembourg, the Netherlands, Denmark, Sweden, Finland and Austria. Southern Europe centres on Italy, Spain, Greece, Portugal, Cyprus and Malta. Central and eastern Europe links the economics and politics of Poland, Hungary, the Czech Republic, Slovakia, Romania and Bulgaria. The Baltic states of Lithuania, Latvia and Estonia aspire to join the first group but share some features with the third, while Slovenia and Croatia straddle this one and the south.

They found these markets in the south during the later 1990s and early 2000s, along with a financialised recycling of their export surpluses. The southern economies relied on a very different growth model dominated by domestic consumption and smaller firms, and relying on higher levels of debt and on devaluations to sustain competitiveness. The central and eastern Europeans shared many of these economic features, becoming recipients of German investment and loans, while the Baltic states relied more on Sweden.

The financial crisis from 2008-2014 transformed the relative power and positioning of these three economic regions. Its fallout also created distinct regional politics and approaches to deeper integration of the EU. Germany dominated the policy response and new rule-making required to save the euro. Balanced budgets, structural reforms and austerity policies were the norm. Redistributive transfers to ease the social costs for the south and east were minimised. These regions’ growth models were disadvantaged by the new rules, creating a convergence between them compared to the more dynamic economies of the northwest.

The political consequences of these crisis measures are now more plain in all three regions. Italy’s recent elections confirmed wider European patterns whereby social democratic parties are gravely weakened, hard-right parties break through and the new cultural cleavage created by migration from the Middle East and Africa shakes up existing party systems. Migration has a greater impact in the northwest and east than the south, where the populist Italian Five Star movement prioritises social and income protection.

Germany’s coalition agreement between the Christian and Social Democrats prioritises greater domestic social investment and closer European integration, resonating with French demands for more capacity in the euro zone. But the Italian result raises the question of whether the French can bring the south into the bargaining on how to balance prudent rules and greater redistribution in the EU. All the governments involved need to find a similar balance between functional demands for more effective co-operation and popular demands for greater responsiveness to a more politicised and contested agenda of European issues in domestic politics.

Going into the economic crisis, Ireland shared many characteristics with the south on debt and bailouts, even though its export-led growth model is more northern. Ireland’s is a liberal market economy like the British and US ones, with competitive market-based institutions, decentralised and unco-ordinated wage-setting, and short-term venture capital, with a university system that promotes general and transferable skills.

Ireland is gravitating to the northwest group in this new European line-up, despite sharing dependency features and the need for transfers with the south. After Brexit we will be culturally, legally and institutionally more alone and vulnerable unless more links and alliances are forged. Corporate taxation and security-defence issues arise to challenge this emergent positioning within a changing EU and these three regions.

Managing the transition demands special skills, since Ireland must maintain an interface with the EU, the UK and the US even as these powerful cores adjust to each other and internally. The cleavages on migration and openness run through Ireland too, even if there is not so far a Eurosceptic movement south of our Border. The Fine Gael Government’s orientation to northwest Europe deserves more critical political scrutiny and open debate than it has had, since these choices will be consequential for the next generation.

1 Irish tourists excluded from visiting Greece and Croatia
2 We need to pay very close attention to what is happening in Britain now
3 Sideline Cut: Vignette shows why Bird is the true shark in The Last Dance
4 Taoiseach has confirmed schools will reopen at the end of August
5 The strain is starting to tell on Brendan O’Connor
Real news has value SUBSCRIBE