Grizzly End – Frank McNally on bears and the fate of St Ursula and the 11,000 Virgins 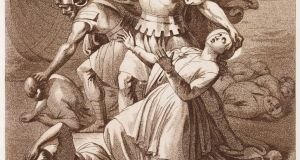 St Ursula and Her Companions, from a 19th-century engraving based on a painting by Filippo Bigioli. Getty Images

Thanks to their various ravages of Europe in the fourth and fifth centuries, the Huns have earned a permanently bad name. But one thing they are almost certainly not guilty of, contrary to a long-standing myth, was massacring 11,000 virgins in Cologne on this date in 383 AD.

The story centres on a British princess named Ursula who, fleeing an unwanted marriage, went on pilgrimage to Rome.

For reasons best known to herself, she brought 11,000 equally chaste companions with her.

And the daunting logistics of getting so many virgins to and from Rome safely were somehow overcome until, on the way back, they ran out of luck and were all slaughtered.

Alas for legend, Brewer’s Dictionary suggests the apparent atrocity arose from a typo – namely that one of Ursula’s (much smaller) retinue was named Undecimilla, and that this was mistaken for “undecim millia” (Latin for “eleven thousand”).

Maybe in this era of fake news, she should be revived as the patron saint of fact-checkers

An alternative theory is that the original number of those killed was 11 but that an abbreviation in a Latin inscription, the letter M, was misunderstood for the Roman numeral, with the massacre multiplied accordingly.

In any case, a Church of St Ursula still stands at the scene of the alleged crime and, as recently as the late 19th century, according to one visitor, its walls were “entirely panelled” with glass cases containing the bones, collected from a local cemetery.

These have long since been removed to a less prominent location, however, while the entire story has fallen into doubt.

Even the historicity of Ursula herself, whose feast day falls on October 21st, is uncertain.

But maybe in this era of fake news, she should be revived as the patron saint of fact-checkers.

The name Ursula means “little she-bear” in Latin, which of course also gives us two of the best-known constellations in the night sky, Ursa Major and Minor. And yet bears have also gone down in etymological history as the animals that could not be named, in Latin or otherwise.

At a time when they were still much feared in Northern Europe, it was thought that merely saying the name might make them appear.

So Germanic tribes avoided their original word for bear, arkto (from which we get the star Arcturus and the Arctic) in favour of such circumlocutions as “the brown one”.

Hence the English “bear”, which came either from “bruin” or perhaps from another similar word meaning “wild animal”. According to some, it is Europe’s oldest known euphemism.

Alongside the reputation for ferocity, she-bears are also famous for their mothering skills. It is via them, for example, that we get a widely popular English expression for making children and other things presentable, ie “licking into shape”.

This derived from another once-popular belief – that baby bears were born as formless blobs until their mothers licked them into bear shape.

First recorded by Pliny the Elder, the myth was still going strong a thousand years later when the Persian physician Avicenna put it in one of his encyclopedias, and it finally made it into English in the 15th century.

It is mere coincidence, however, that the separately evolved verb “to bear” includes a mothering element.

Comparisons between that perilous journey and Ireland’s move to Covid Level 5, aka the Straits of Micheál Martin, begin and end with the fact that it him took six weeks

Or at least I think that’s coincidence. The verb bears a lot of different meanings (and there’s another one), some of them on the theme of stoicism, which is much needed in Ireland currently.

But the concept of “bearing up” – a thing we will be advised to do a lot this winter – would take on a dramatically different sense in an ursine context.

The Portuguese explorer Ferdinand Magellan may be another hero for these straitened times – pun intended but apologised for – because it was 500 years ago today that he rounded a cape in southern Argentina and entered what are now known as the Straits of Magellan.

He was seeking the shortest navigable route between the Atlantic and Pacific Oceans.  And comparisons between that perilous journey and Ireland’s move to Covid Level 5, aka the Straits of Micheál Martin, begin and end with the fact that it him took six weeks.

Mind you, if we do get out the other end in early December, we may also share some of his emotion when, on seeing the Pacific, he “wept for joy”.

A religious man, Magellan originally named his discovery as the “Strait of All Saints”, after the November holiday. It was his sponsor, the Spanish king, who renamed it in his honour.

But Magellan also named the lesser known landmark he rounded on October 21st, 1520. And that remains the “Cape of the Eleven Thousand Virgins.”