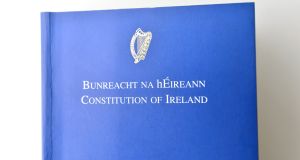 Article 17.2 of the Constitution provides that the Dáil shall not appropriate public money for any purpose unless the Government has first recommended that purpose to the Dáil by a Money Message signed by the Taoiseach. Photograph: Alan Betson

Taoiseach Leo Varadkar’s plan to get the Dáil to sit for an extra week in July to deal exclusively with legislation, is seen as a serious move on the legislative logjam in the current Dáil. One of the main reasons why “new politics” has lost its glow has been the Dáil’s inability to pass legislation expeditiously with 137 Bills approximately before the Dáil, 119 of which are Private Members’ Bills.

At its heart is the constitutional roles of the Dáil and the Government in legislation and public finances and the capacity of the Government to effectively “kill” Private Members’ Bills notwithstanding their progression in the Dáil.

The expectation under “new politics” was that the roles in terms of primacy between the Dáil and the Government would be reversed, the Dáil allowed to legislate freely.

But when it comes to spending public moneys there is no ambiguity: the initiative in matters of tax and expenditure is denied to the legislature and rests solely with the executive.

Article 17.2 of the Constitution provides that the Dáil shall not appropriate public money for any purpose unless the Government has first recommended that purpose to the Dáil by a Money Message signed by the Taoiseach. Similarly under Dáil Standing Orders amendments to Bills appropriating public money or imposing taxation are confined to a member of the Government.

Thus a Private Members’ Bill involving appropriation cannot proceed beyond second stage to Committee unless a Money Message has been furnished by the Government. The decision by the office of Ceann Comhairle on whether a Money Message is required normally rests on whether the expenditure is merely an extension or variation of an existing activity of the Government or a publicly funded body, which does not involve an appropriation, or the imposition of anew legal and definable responsibility, which does.

The blocking of a Private Members’ Bill by refusing a Money Message is unprecedented in the past 50 years simply because it would never arise where there was a Government majority as the Bill would be simply negatived.

However, given the current Dáil’s arithmetic, the potential status of these Private Members’ Bills to become law clearly has alarmed the Government (and no doubt the permanent Government). When faced with uncharted territory the Government reverted to its authoritarian ways of old. The peremptory manner of its last-minute refusal to grant a Money Message when the Select Committee on Justice and Equality, was about to commence consideration of the Judicial Appointments Bill on November 30th 2016, smacked of a political stroke given that a similar Government Bill was not ready at the time.

You would expect a refusal to grant a Money Message – given its import under the Constitution – should only be based on fiscal grounds and not on any ulterior political motive. Moreover the fact that three other Private Members’ Bills have received a Money Message in this Dáil indicates there may be no consistency in approach by the Government from a fiscal perspective.

At another meeting of the same select committee on May 17th 2017, when discussing another refusal of a Money Message this time for the Coroners’ Bill, it is recorded that the Ceann Comhairle is seeking a meeting with the Taoiseach to discuss the issue of Money Messages in respect of four Bills.

It is likely that some accommodation between the Government and the Dáil will be provided in the short term, but any compromise would have to be measured and not open ended. Ultimately the Government, in carrying the prime responsibility for the public purse, has the upper hand and while this may strike a discordant note with the purportedly ascendant Dáil under the banner of “new politics”, this is in conformity with international practice of other systems of parliamentary Government similar to our own. However, while a Government cannot be compelled to grant a Money Message, it can be required to explain to the Dáil why one was refused.

This requirement done formally in the Dáil may suffice in achieving a better understanding and balance between the superior role of the Government to protect the public purse and the Dáil’s right to legislate and ensure, as far as possible, a refusal to grant a Money Message in the future is based on fiscal rather than political grounds. The current risk of a potential clash between the Dáil and the Government would be significantly reduced.

In practice if the decision based on fiscal grounds is required to be promulgated, the Money Message would invariably be granted as in the majority of Private Member’s Bills the appropriation can be minor and the Dáil’s right to legislate could be maintained within the constitutional framework of the Government’s prime responsibility for holding the public purse strings.

Kieran Coughlan is a former secretary general of the Oireachtas Service and Clerk of the Dáil 1990-2013. Currently adjunct professor, Department of Government, University College Cork.