Hugh Linehan: Is it time for publicly funding serious journalism? 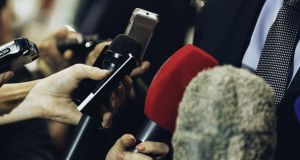 “Print circulation and advertising slip further every year, with little realistic prospect that digital revenues will make up the shortfall in the visible future.”

The first regular commission I had with this newspaper was writing the Film of the Day for the TV listings page. It was only 50 words, but I do recall being pleased when someone pointed out market research which showed it was the most-read page in the newspaper.

I wonder whether that’s still the case. I haven’t checked the TV page in years; nor have I looked up a sports score, or opened a paper to see what time a particular show is on, or done a slew of other things you once could do only via the medium of newsprint.

The industry jargon phrase for this process is “unbundling” – the various interlocking services a general interest newspaper used to provide have been chipped away one by one with the arrival of cheaper, faster, better digital alternatives. The concept has been around for a long time, but it seemed newly relevant while reading this week’s Reuters Digital News Report on the state of the Irish media.

In recent years, the Reuters report, which measures trends in media consumption across 70,000 people in 36 different markets, has become a grim almanac of the inexorable decline of legacy media – print, TV and radio – and the rise of digital and social platforms.

This year it provides a fascinating level of detail, some of it counterintuitive, about what Irish people want from their newspapers and media. Among other things, it suggests that, the harder the news, the greater the level of interest from older consumers. “Apparently, the older the audience the more serious it becomes,” it notes.

Conversely, the increasing popularity of subscription services such as Netflix and Spotify seems to be leading to some greater enthusiasm, at least among the younger and more affluent, for the idea of actually paying for quality journalism. So paradoxically, although younger people are less interested in serious news, they’re more willing to pay for it online. Go figure.

The underlying reality is still the inexorable shift away from legacy media. Print circulation and advertising slip further every year, with little realistic prospect that digital revenues will make up the shortfall in the visible future. Broadcasters are in slightly better shape (in Ireland, though not elsewhere), but a generational shift away from linear viewing is coming fast down the tracks.

Partly in reaction to some of these trends, the last six months have seen a striking shift in marketing strategy by quality newspapers.

With taglines such as “The Truth is More Important Now Than Ever” (New York Times), “Democracy Dies in Darkness” (Washington Post) and The Irish Times’s “Facts Have No Agenda” campaign, newspapers are now aggressively promoting the idea that the services they provide are a public good, one that’s worth paying for. All of this is true, even if one might wish the argument had been made a little earlier in this existential crisis. But it raises an inevitable question; what then happens if, as seems very possible, the most optimistic projections for digital subscription numbers still aren’t enough to sustain that public good?

At the same time as the Irish portion of the Reuters report was being launched in central Dublin on Thursday, a seminar at Dublin City University was asking the previously unimaginable question (in this part of the world, at least): what role if any, is there for public funding to sustain public-interest journalism?

Despite the setting, the question is far from academic. Coverage of the courts, local politics and other parts of civil society is fast disappearing as media companies retrench, retreat and rationalise. Expensive, legally fraught investigative reporting – which, by its nature, can often take weeks or months and then come to nothing – also becomes ever harder to sustain as editorial budgets are cut and cut again.

If public-interest journalism of this sort is indeed a public good, and if the provision of that public good is threatened by a market failure, then it is reasonable to ask what role if any the State might have in helping to remedy that failure. After all, it already intervenes and provides support for a range of other activities it considers socially or culturally valuable, including tax incentives for film and television production, and financing public-service broadcasting (including journalism) through the licence fee.

When it comes to State action, NewsBrands Ireland, the representative body for Irish newspapers and magazines, continues to lobby primarily for a reduction in the VAT rate. It’s a perfectly rational proposal – newspapers are zero-rated for VAT in the UK and other European countries in recognition of their role in civic society. But focusing on the very part of the business which is in terminal decline doesn’t inspire much confidence in the industry’s vision for its own future.

It’s clear why newspapers are wary of seeking state support for public-interest journalism. The print media reserves the right to be independent, to take sides, to make a stand and to campaign on issues of its own choosing. That independence could be threatened if the state had some role. The counter-argument is that newspapers have always managed to contend with vested interests in the form of proprietors and advertisers. What’s likely is that for the first time newspapers and broadcasters may ultimately and reluctantly have to confront the question of which parts of their bundles will require (and deserve) some outside help to survive.