Dublin needs an elected mayor. It will never happen

Noel Dempsey: Too many potential rivals would oppose giving the city such power 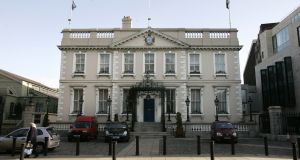 The development of our capital has been hindered and obstructed by an overly centralised government system and excessive parochialism among representatives at local government level.

It will remain a very poor second- or third-tier city when compared to great cities like Paris, Sydney and San Francisco. It is a miracle the city is doing as well as it is with the current structures.

That it is, is a tribute to the commitment and dedication of administrators currently in place. They do a very good job in spite of the disadvantages placed on them by the political system. But Dublin could do so much better with its own directly elected mayor who would provide leadership and focus with a strong mandate from the people of Dublin.

When I speak of Dublin I refer to the area covered by the current four Dublin local authorities. It probably should include portions of neighbouring counties but this is the minimum area required to form a reasonable metropolitan area similar to other progressive countries around the world. It is an area that has the population and the social, economic and financial resources to become a standalone region.

Sadly, I believe it will not happen because it will continue to be opposed strenuously by the political and administrative systems at local and national level. Allowing a strong Dublin region with a directly elected mayor will diminish the power and influence of our TDs and Ministers.

A mayor directly elected by 1.2 million people would be a powerful figure and would command huge respect and credibility locally, regionally, nationally and internationally. He or she would provide the visibility and accountability central to democracy. They would become a focal point for the promotion of the interest of the citizens and the region.

A directly elected mayor focused on the Dublin region would have the clout to ensure that policies pursued locally and nationally took account of the needs of the capital in an era where there is increased international competition among cities for capital, labour and knowledge.

Central government operates on a one-size-fits-all approach. It is not flexible enough to meet local needs because they do not have the necessary local knowledge or commitment to the local area. Politically they are conscious that they cannot be seen to be favouring one region over another.

A prime example of this is the current homelessness situation which requires a very specific response in Dublin (other areas have homelessness problems that require specific solutions which differ from Dublin) but central government applies the same “solutions” as Dublin.

A directly elected mayor in Dublin would have no such inhibitions and their mandate would also give them a moral authority to ensure the necessary specific actions could be decided on and acted on locally. Someone would be responsible.

It will not happen in my lifetime or yours no matter how much I wish for it!

Think about it: a mayor directly elected by 1.2 million people? They would have a greater mandate than any other politician in the country, including An Taoiseach. The existing political system would fear it because they would then have to deal with someone with a mandate far in excess of their own.

Local politicians won’t go for it either because they would have to give up their chance to be mayor of Fingal, South Dublin, Dún Laoghaire or Dublin City Council in the “buggins’ turn” system and that operates currently. This system treats leadership of the relevant councils as an annual prize to be shared out among dominant groups.

It is impossible to expect a policy-driven approach to local government in Dublin when these vested interests prevail, and that means Dublin will continue to underperform when compared to other comparable capital cities.

Politicians are not the only vested interest that oppose the concept of a powerful Dublin leader. Government mandarins also want to avoid the directly elected-mayor scenario like a plague.

A directly elected mayor is needed to act as an advocate and leader for the most important region in the country at a time when we are emerging from the economic crisis.

That mayor should be a strategist for long-term economic planning in the region rather than being involved in the day-to-day affairs of local councils. They should also have a major role in bringing coherence to the public services in the region. This would beat the current system where there are four councils with four administrations and numerous public bodies operating separately and in an unco-ordinated manner which leads to all sorts of difficulties in the proper planning and development of the region.

At a time when trust in politics and politicians continues to be at a low ebb, the direct election of a mayor would give the incumbent an unparalleled democratic legitimacy to speak for, represent and negotiate on behalf of the entire region with authority.

Noel Dempsey was a government minister between 1997 and 2011. He is chairman of the Temple Bar Company