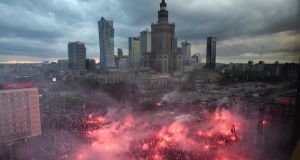 Polish nationalists lit flares as they took part in a demonstration under the slogan ‘We want God’ as part of Polish Independence Day celebrations in Warsaw on Saturday. Photograph: Radek Pietruszka/EPA

Far-right movements thrive on publicity and fight to extend their influence by ensuring their propaganda becomes accepted as a “normal” part of political life. The march last Saturday in Warsaw by an estimated 60,000 far-right demonstrators illustrates this process very well. Held to mark the anniversary of Poland’s independence in 1918, the march included contingents from Hungary, Sweden, Italy, Germany and Britain. Prominently displayed on a bridge was a banner reading: ”Pray for Islamic Holocaust”. Others called for a “White Europe of fraternal nations”.

In light of such explicit racism it is reprehensible that the Polish interior minister described the Warsaw march as patriotic and a foreign ministry statement referred to a “great festival of Poles with different views”. Only later did President Andrzej Duda say there was no place in Poland for xenophobia, pathological nationalism and anti-Semitism. Official ambiguity in response to such provocation is in keeping with the ruling Law and Justice party’s rejection of refugee quotas proposed by the European Commission. It describes them as part of a failed multicultural experiment in the western part of Europe.

The Polish government’s rhetoric tends to conflate refugees, terrorism and Islam into a perceived threat to Polish values

The Polish government’s rhetoric tends to conflate refugees, terrorism and Islam into a perceived threat to Polish values. Similar themes are heard in Hungary, Austria and the Czech republic. The political aims of these far-right movements are clear: opposition to the European Union, Nato, homosexuality, feminism, Muslims and Islam. Such themes are also heard in Donald Trump’s United States, where a similar process of normalising the alternative right is under way. Indeed President Trump asked in his Warsaw speech last July whether the West had the will to survive against Islam.

His question is utterly misconceived. European and western values are rather challenged by an Islamophobia fanned by far-right movements with support from nationalist and populist politicians. This new racism is the real threat to Europe’s liberal order.

1 Mother of McGinley siblings arrested on suspicion of murder
2 Billie Eilish: Her stance that her body is not public property is still a radical act
3 Catherine Noone’s apology over autism comment ‘good enough’, Taoiseach says
4 Claim withdrawn after court shown video of man walking without wheelchair
5 No obvious signs of injury on remains of McGinley children
Real news has value SUBSCRIBE