Gay cake case: Why the Ashers bakery ruling was correct 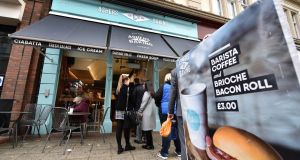 Ashers: the court said, “If businesses were free to choose what services to provide to the gay community on the basis of religious belief, the potential for arbitrary abuse would be substantial.” Photograph: Charles McQuillan/Getty Images

There was an outcry when the Christian bakers found to have discriminated against a gay man by refusing to make a cake bearing a pro-gay marriage slogan lost its appeal against the ruling.

A number of commentators have expressed concerns about its implications on freedom of expression and conscience.

The National Secular Society takes freedom of conscience and expression issues very seriously and so reserved judgment on the ruling until we’d had a chance to consider it carefully. On reflection we fully endorse the decision of the court of appeal in Belfast.

We very much concur with the former BBC legal correspondent, Joshua Rozenberg, who paraphrased the ruling, saying: “The correct comparison was not with a straight man who wanted a ‘gay’ cake, which Ashers would have refused. It was with a gay or straight person who ordered a cake celebrating traditional marriage – which the company would have supplied.”

Ashers are perfectly at liberty to refuse to fulfil an order for the cake with the pro same-sex marriage message provided it would also refuse one with a pro opposite-sex marriage too. They are now, understandably, going to limit themselves in future to birthday cakes, avoiding religious and political messages; arguably the cake message in question was both. This way, Ashers’s proprietors can lawfully avoid having to produce any cake with a message which their proprietors oppose.

The proprietors remain entirely able to express whatever lawful opinions, however harsh, about homosexuality and same-sex marriage in their personal lives.

And as the court noted: “It was not suggested that there was any approbation of the message on the face of the cake and the trial judge concluded that what the respondent wanted did not require them to promote or support gay marriage. The fact that a baker provides a cake for a particular team or portrays witches on a Halloween cake does not indicate any support for either.”

Those critical of this ruling have argued that, following it, a Muslim baker refusing to bake a cake with an image of Prophet Muhammad, could be breaching equality law. A careful reading of the ruling reveals that this is not the case.

In our opinion therefore, the freedom of conscience and freedom of expression arguments are beyond baseless, they are wrong and mask something deeply unpleasant. The logical but carefully unspoken result of allowing them, as they would have happened had the decision gone the other way, was that Ashers could have put up a sign reading “no pro-gay messages on our cakes”. In the court’s words: “If businesses were free to choose what services to provide to the gay community on the basis of religious belief, the potential for arbitrary abuse would be substantial.”

This needs to be put in the particular political and religious context of Northern Ireland, the most religious part of the UK, where gay people have been victimised and denied the rights enjoyed by others by both the majority population and the institutions. The cake slogan was the most benign reference to the ugly reality; Northern Ireland is the only part of the UK where same-sex marriage remains unavailable. There was a religiously motivated veto of a majority decision in the Northern Assembly to introduce it. And religious forces in Northern Ireland have consistently opposed civil rights for gay people that were enjoyed elsewhere in the UK. Forty years ago it took a brave man applying to the European Court of Human Rights to secure the decriminalisation of homosexual acts.

The message of the court of appeal in Belfast, echoing Bull v Hall, the Cornish private hotel same-sex couple and double-room case, was that businesses cannot discriminate on protected grounds whatever the proprietors’ personal views. And as the UK Supreme Court noted, had it been the same-sex couple who ran the hotel, they would have been in breach of equality law were they to have refused beds to the Bulls because they were religious.

There is an even more insidious element that troubles us about the Asher case. The court stated that Ashers was a “business for profit and was not a religious organisation”. Were the decision to be reversed it would, as its detractors well know and the court strongly implies, open the door for non-religious organisations to discriminate based on the (usually religious) consciences of their proprietors.

This has already happened in the United States, where a court case (involving a commercial organisation called Hobby Lobby owned by religious conservatives) “permitted religious objectors to refuse to comply with a rule requiring employers to include birth control in their employer-provided health plans”.

The dissenting justice explained that the decision effectively overruled long-standing doctrines establishing that “accommodations to religious beliefs or observances . . . must not significantly impinge on the interests of third parties”. Under Hobby Lobby a religious objector may now wield their faith to diminish the rights of others.

Four years ago the National Secular Society intervened, largely successfully, at the European Court of Human Rights over several cases of evangelical Christians challenging equality laws because we thought an adverse decision would undermine the equality law edifice. We think a reversal of Ashers decision would, for all the reasons given above, be similarly dire.

This is an edited version of a blog by Terry Sanderson, president of the UK National Secular Society, which appeared on the society’s website

4 We think we have enough for a deposit. Should we buy now or rent a bit longer?