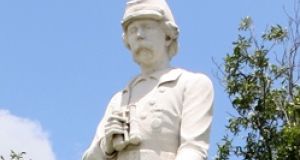 Dick Dowling: born in Co Galway, he went on to be a Confederate military commander in Texas

At the entrance to Hermann Park in the city of Houston in Texas there stands a very striking statue in white marble on top of a tall plinth. It’s of a man in military uniform holding a pair of binoculars in his right had while his left rests on a sword. He has a large drooping moustache. An ample martial cap covers his head. He looks into the distance in a sort of heroic stance.

I came across it purely by chance. On a brief visit from our cargo ship docked miles away, I got tired of walking about the hot pavements of the traffic-loud streets of this throbbing metropolis, a centre of the US space and petrochemical industry. I sought some rest in a place of lawns and trees and seats.

It struck me that Dowling was an Irish name and on the inscription I saw that the Ancient Order of Hibernians had some role in erecting the statue.

I was curious about how this man earned such a singular memorial and took an interest in the history of Texas, particularly the part played by Dick Dowling and other people of Irish background.

It was of special interest to me to find that he was born in one of the townlands of the village of Milltown in north Galway with Tuam as the nearest town, where our family had lived for a time. In fact there is a street in Houston named Tuam in Dowling’s memory.

He was born in 1837 the second of eight children. The family was evicted from its small holding in 1845, the first year of the Famine. The following year, as a nine-year-old boy, Dowling and his elder sister fled to New Orleans.

His family followed a few years later but his parents fell victim to the yellow fever that was endemic in the area.

Even as a teenager Dowling showed remarkable business skills, and he set up a successful saloon in the French Quarter of New Orleans. To disguise his youth, this red-headed fellow grew a flourishing moustache.

The influx of large numbers of Irish fleeing the destitution in their own country led to some resentment and anti-Irish feeling in the city.

It was a bustling hub of trade where his entrepreneurial drive led him to establish a number of saloons there, as well as helping to set up the city’s first gaslight company. He also became involved in running the first streetcar service.

Along with these activities, he got together a largely Irish militia group of 47 men to help keep law and order in the city. Many worked in the docks and were patrons of his saloons.

At the outbreak of the Civil War in 1861 this body of active men became part of the Confederate forces, with Dowling as first lieutenant. In 1863 it was given the responsibility of manning an earthwork fort in the Sabine Pass inlet of the sea.

This was an obvious point of entry for an invasion of Texas by Union forces. Gun boats would be able to force their way up the two shallow channels to allow larger transports carrying troops to follow and take control of the port and the surrounding area.

During the summer months of 1863, Dowling trained his team vigorously in gunnery from their six cannons. Using white stakes embedded in the sand, they became expert at estimating distance and elevation.

In September 1863, a flotilla of Union gunboats and transports, 22 vessels in all, carrying 5,000 troops approached Sabine Pass.

Four gunboats, with a leading landing force, started to bombard the fort as they steamed quickly up the channels.

They were met by a rapid and accurate fire from Dowling’s men. Two gunboats were disabled and captured while the others kept their distance.

The flotilla backed away and returned to New Orleans, leaving Dowling’s men to accept the surrender of 350 men and to gain large quantities of supplies and munitions.

Dowling’s men were lauded as heroes in Texas.

He was made a major but played no part in any further military operations.

After the war ended in 1865, he returned to running his saloons, as well as taking a leading role in the commercial and civic life of the city.

His promising career was ended when he succumbed to a bout of the yellow fever that ravaged the city of Houston in the summer of 1867.

In recent years, there has been an impetus in the US to remove memorials to Confederate figures because of the Confederacy’s association with slavery.

In 2017 a man was arrested for trying to blow up Dowling’s statue in Houston. In Tuam, the plaque to his memory set up in the wall of the town hall in 1998 has drawn some criticism but the town council refused to remove it.

The city of Houston still has its Tuam Street, although not many of its six million people would know it was named after a town in Co Galway.