Frank McNally: The service now arriving on Platform 1 is a piano

An Irishman’s Diary on the music of trains 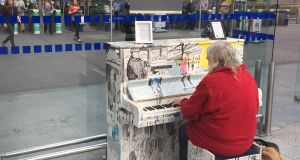 Playing the blues in Heuston Station in Dublin

The latest additions to Ireland’s railway station infrastructure will not speed up your journey much. They may, however, reduce the stress involved. On a good day, they might even transport you to somewhere better than expected, at least for a few minutes.

I refer of course to the pianos which have been appearing at Dublin stations in recent months, starting with Pearse, then Heuston, and now Connolly, on which passers-by (preferably with some musical competence) are encouraged to play. The pianos are proving almost as popular as swings in playgrounds. I have heard this from a 13-year-old boy who wasted 45 minutes in Heuston one Friday afternoon of late, vainly waiting for a chance to play Chopin’s Nocturne in C Minor.  He would have given up much earlier, he said. But his proud mother – who he asks to remain nameless – just wouldn’t let it go. Anyway, enough about my son.

Chopin is not typical of the stuff played in Heuston. More often than not when I’m passing through, it’s jazz or blues I hear. And that seems only right, because blues in particular, and to a slightly lesser extent jazz, have colonised railway travel like no other musical forms.

This is mostly the influence of the US, where trains have long been romanticised as the transport of the poor, and where the route-map is epic enough that there is always one going somewhere overnight, complete with lonesome whistle. The number of American train songs is beyond counting. Only road-travel (by Greyhound bus, preferably) has sometimes rivalled rail as the songwriter’s favourite mode of journey. Air transport barely registers.

It’s a true and telling story that the Gladys Knight classic Midnight Train to Georgia was at first titled Midnight Plane to Houston. Then, at the suggestion of an Atlanta record producer, the plane was grounded and the destination changed. Now it’s unthinkable that the song’s failed hero could have left Hollywood for anywhere else or by any other means.

One of the downsides of living on this small island is that you can’t get a midnight train from Heuston or anywhere else. For similar reasons, our stock of indigenous railway songs is low, although the unreliability of services has sometimes lent journeys the epic quality required for music.

It’s no coincidence that the most famous Irish train song, Are You Right There, Michael?, hints at the possibility that passengers may not reach their destination today.

Nor does it seem mere chance that The Train from Sligo should have inspired Thom Moore’s ballad of that title (aka The Scholar), even if the lyrics imply that the service’s inconsistencies are entirely in the singer’s head. It goes too slow on the way home from school, too fast in the opposite direction. That’s a respectable average for the Sligo train.

Alas, the most recent Irish rail song I’ve heard is about the lack of a service: Lisa O’Neill’s No Train to Cavan. Daniel O’Donnell and the late Big Tom could have sung that too, with slightly modified lyrics, although the latter’s repertoire did include at least one original of the genre.

It even name-checked “Boxcar Willie” and featured a lonesome whistle, although it was only the “GNR Steam Train” from Castleblayney. This had taken Big Tom away from home once. But like the best American blues trains, it could never now bring him back, with the ’Blayney service having closed in 1957.

Are there any songs about the train to Cork? I don’t know, but pending enlightenment from readers, mention of that city in yesterday’s column – on Ireland’s German internees of the first World War - provoked memories from John Horgan, who once shared a flat on St Patrick’s Hill with a music student called Colum O’Cleirigh.

O’Cleirigh studied at UCC under the by-then ancient Tilly Fleischmann, “who used to boast to him of having been trained by Liszt” and who wore talcum powder so liberally it looked like she had “dipped her head into a sack of flour”.

On a separate note, John and Colum attended a concert one night involving another great pianist, the Cork-born, Scottish-reared Charles Lynch, who came back to their flat afterwards and, smoking constantly until he was “covered in ash, like a Santa in a snow-globe”, played Liszt, Chopin, and Rachmaninov until 2am, when he was finally persuaded into a taxi.

Such devotion to classical piano was lost on their landlady, “the formidable Mrs Corry”. At 10am next day, she pounded on their door: “Mr Horgan, Mr O’Cleirigh”, she announced in stentorian tones. “There’ll be no more of that jazz.”

1 Covid-19 outbreak recorded on ward at Naas General Hospital
2 Ireland among countries urged to consider reinstating Covid-19 restrictions
3 Irish Michelin two-star restaurant to sell kebabs and fries from takeaway trailer
4 ‘I’ve been sleeping with my girlfriend’s sister. I need help. What do I do?’
5 Russia approves Covid-19 vaccine after less than two months of human tests
Real news has value SUBSCRIBE