Frank Bruni: Donald Trump is tweeting on the edge of oblivion 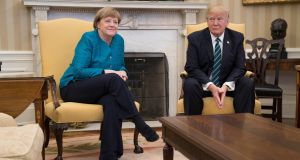 During Angela Merkel’s visit to Washington he credited Germany with smarter negotiators. But there are no such negotiators. (Stephen Crowley/The New York Times)

Donald Trump faces a stark choice. He can tweet, or he can govern.

He can indulge his persecution complex, firing off missives that compare Barack Obama to Joseph McCarthy and U.S. intelligence officers to Nazis, or he can recognize it as a gateway to disgrace and irrelevance.

He can make his presidency about his own viscera, or he can make it about the country’s welfare. He can do what feels cathartic in the moment, or he can do what’s constructive in the long run. He can dabble in bright colors and shiny objects, or he can deal in durable truths.

I’m focusing on Twitter because it teases out his worst traits. It’s the theater for vainglorious, vindictive, impulsive Trump, and it was the realm in which he made the wild accusations that Obama had wiretapped Trump Tower. On Monday, James Comey debunked those charges, certifying them as the gaseous fulminations we more or less knew they were.

And through much of Tuesday, Trump’s personal Twitter account essentially went dark. There was nothing from the hours around dawn, which is when he typically visits with his darkest vapors. There was only anodyne stuff later on: a shout-out to the scientists at NASA, a salute to U.S. farmers.

Either someone in his orbit convinced him, at least briefly, of the damage he was doing and the miserable situation he’s in, or Trump himself summoned some wisdom and restraint. He must be capable of that. Can he continue it?

It could be argued that every presidency is a tug of war between private demons and the public interest, between the commander in chief’s indulgence of his own psychological needs and his attentiveness to the hard work of America. With Trump it’s a furiously pitched battle, and the demons are way out ahead.

One of them hasn’t received the attention it warrants. With all our condemnations of Trump the bully, we’ve overlooked Trump the bullied, which is the version more likely to bring him down. I mean the Trump who’s hellbent on believing that he’s up against ruthless enemies; the Trump who must amplify every stride by casting it as a triumph over formidable odds; the Trump who’s throwing a pity party for himself the likes of which few of his predecessors ever attempted.

His election somehow brought this Trump to the fore. In a paradox as strange as everything else about him, victory played handmaiden to a feeling of victimization: his own and the country’s.

It’s precisely that feeling — “a sense of persecution bordering on faith,” as Glenn Thrush and Maggie Haberman wrote in The Times on Monday — that brought about the wiretapping tweets.

But it has also brought about many other ill-advised tweets and ill-considered public statements, enveloping Trump in a foul air of grievance. If it’s not the Mexicans taking advantage of him and of us, it’s the Australians or the Germans or the Chinese. Take your pick.

The “deep state” is out to get him. The leaks are a plot against him.

Sometimes his mewling has an obvious prompt. When your approval ratings have sunk as low as his — a recent Gallup tracking poll showed that only 37 percent of Americans were pleased with his performance — you have an obvious investment in calling such surveys rigged and wrong, as Trump is still doing.

But other whimpering is absurdly conceived and needlessly divisive. During Angela Merkel’s visit to Washington last week, he ranted about an unjust trade imbalance between Germany and the United States, crediting Germany with smarter negotiators. But there are no such negotiators. We trade not specifically with Germany but with the European Union as a whole.

It’s possible that he doesn’t know that. It’s also possible that he chose to disregard a detail that would have complicated and maybe nullified his complaint. Why let the facts get in the way of a tantrum that he then transferred to Twitter, where he bellowed that Germany owed money for its defense to the United States and NATO?

It’s funny: Comey’s testimony Monday made clear that someone does have a right to feel put upon. That someone is Hillary Clinton. He stressed how “hated” she was by Vladimir Putin. He also confirmed that before Election Day, intelligence officers were looking into whether Putin and the Russians were meddling in the election because of that hatred. At the time Comey said nothing about that, even as he announced that the FBI was taking a fresh look at newly discovered Clinton emails.

Trump is no victim. He’s the luckiest man alive — or has been, until now.

But his allies “have begun to wonder if his need for self-expression, often on social media, will exceed his instinct for self-preservation,” Thrush and Haberman wrote. He can vent his emotions or exercise his responsibilities. The decision belongs to him, the consequences to all of us.

1 Gardaí cannot prosecute people who breach midlands movement restrictions
2 Irish in Australia: ‘We are in for a few hard years’
3 Covid-19: One more death and 174 further cases confirmed in State
4 TV Guide: 24 of the best shows to watch this week
5 Harry McGee: We are seeing the return of Straight-Talking Leo
Real news has value SUBSCRIBE