Jonathan Powell: What happens now that Martin McGuinness is gone?

The former IRA man made the Good Friday Agreement work. But now power-sharing is under threat, and the stage is set for a return to grievance politics 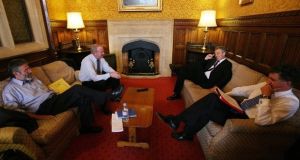 Gerry Adams (from left) and Martin McGuinness with Tony Blair and Jonathan Powell at Westminster in 2007. ‘He deserves to be remembered for the risks he took and the success he achieved in making Northern Ireland a better place.’ Photograph: Stefan Rousseau/PA

When I first met Martin McGuinness in October 1997 I declined to shake his hand. As far as I was concerned he was a terrorist and a member of an organisation that had shot and wounded my father, and put my brother on a death list for eight years.

A few months later McGuinness called me and asked if I would come to Derry incognito without telling the securocrats. I agreed and flew to Belfast, took a taxi to Derry and stood on a street corner feeling foolish. Two men with shaved heads approached me, pushed me into the back of a taxi and drove me around for an hour until I was completely lost. They let me out by a house on the edge of a neat little estate.

I knocked on the door and McGuinness came to the door on crutches, making an unfunny joke about kneecapping. I spent three hours in the living room talking to him – the lady of the house had gone out asking no questions but leaving tea and sandwiches. We didn’t make any breakthroughs, but it became clear to me in the course of the conversation that the only way to make peace is to talk to your enemies and treat them as you would want to be treated yourself. I spent the next decade flying back and forth across the Irish Sea to meet the Sinn Féin leader, Gerry Adams, and McGuinness in safe houses in Belfast and Dublin, and we eventually got to a lasting peace agreement in 2007 .

McGuinness was the archetypical hardman, and a self-confessed IRA member – yet he popped up every time peace was discussed. In 1972 he was in the IRA delegation flown by the British government to meet the Northern Ireland secretary, Willie Whitelaw, in Cheyne Walk for abortive talks. Even more remarkably, in 1991 he was at the IRA end of the secret channel to the John Major government. He sent the first message, now contested: “Our war is over but we need your help to bring it to an end.” And he was the leader of the Sinn Féin negotiating team with the UK government from 1995.

I think it was probably in the mid-80s that McGuinness and his colleagues finally decided to seek peace rather than war. By then, he and Adams were well past fighting age. They knew the British army would never wipe out the IRA, but they could see the next generation of republicans being shot and arrested, and realised the war could go on for ever. They were never going to drive the Brits out of Northern Ireland, far less convince the Unionist majority by physical force of the virtues of a united Ireland. They then started reaching out: first to John Hume of the SDLP, then to the Irish, and finally to the British government. In doing so they risked not just their careers but their lives.

In the 10 years I dealt with them I was fascinated by the relationship between Adams and McGuinness. They had been together longer than most married couples. Adams was in command but McGuinness played a crucial role, and if a nerve was touched he was the one who would spiral into an emotional diatribe in defence of some Republican shibboleth. Sometimes they would play a good cop, bad cop routine with me – with Adams as the tough one and McGuinness as the friendly one. The Irish government always believed McGuinness’s principal role was, because of his credibility as a hard man, to act as a guarantor for IRA volunteers that they would not be sold out, and the Taoiseach, Bertie Ahern, would always keep one eye on him to judge his reaction in any discussion.

More remarkable than McGuinness’s role as a peacemaker was his part in making the peace agreement work. No one could have predicted that the IRA leader from Derry would be able to work with the firebrand preacher Ian Paisley as first and deputy first minsters of the assembly. Yet from the first day, the Chuckle Brothers were born. I sat in the first minister’s office with Paisley, McGuinness, Tony Blair and Ahern crammed on the sofa as McGuinness and Paisley competed to crack jokes. McGuinness wisely deferred to Paisley’s age and showed genuine concern about his wellbeing. As a result, Paisley’s widow and son still have a soft spot for the former terrorist. And for 10 years McGuinness managed to make the power-sharing mechanism in Northern Ireland work with successive DUP leaders.

Now a new generation not involved in the Troubles has to make the system work. Many, like DUP leader Arlene Foster, had terrifying personal experiences of the violence, but the question is whether they can put those nightmares behind them and share power, as Paisley and McGuinness were able to do.

This task is, of course, made even more difficult by Brexit. The shadow of a returning hard border between Northern Ireland and the Republic is shaking up identity politics in the province once again. Sinn Féin has been presented with an ideal cause to campaign for and even the prospect of revisiting the idea of a united Ireland, given the majority vote against Brexit.

The DUP will be even more defensive after unionism’s political setback in this month’s assembly elections, and reluctant to make any concessions, let alone asking their leader to stand down while an investigation is conducted into the heating scandal . All the ingredients are in place for a long-running political standoff. This in turn leads the DUP to question the very basis of power sharing – the crucial ingredient of the Good Friday agreement.

Of course there are major drawbacks in a forced coalition. In Bosnia a similar power-sharing system agreed at Dayton has led to endless corrupt city governments. But a return to a majoritarian system of government in Northern Ireland is unlikely, at least until the province has moved beyond sectarian politics. That means there is no obvious way out of the stalemate now facing the parties, and indeed it may actually suit Sinn Féin and the DUP to return to grievance politics for the foreseeable future rather than to agree to form a stable government. If so, McGuinness has left us at a very untimely moment.

He managed to keep the system together while he was alive. Now he has gone, no one should forget the violence and the victims of his early life, but nor should they forget his remarkable contribution to making peace and to making peace work in the province. He deserves to be remembered for the risks he took and the success he achieved in making Northern Ireland a better place. He will have an important and enduring place in Irish and British history.

The Irish Ties view on food labelling: defending the sausage

1 Three relatives dead after apparent murder-suicide in Kanturk, Co Cork
2 Don McLean: ‘My ex-wife is the worst person I ever knew’
3 Woman stranded in Ireland due to pandemic has ‘miracle baby’
4 How much state pension will I get next year?
5 Covid-19: Further 939 cases and three deaths reported in State
Real news has value SUBSCRIBE