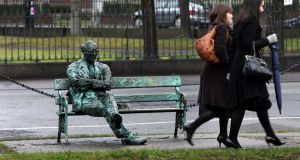 Walking home from the rugby on Saturday night, I passed Patrick Kavanagh’s old flat on Pembroke Road, and then his twin canal bank seats, off Baggot Street Bridge. More heroically, I also passed several pubs he used to drink in; although still buzzing from the excitement of the game, I was sorely tempted by the thought of a few pints.

The temptation had to be resisted, however, because I had a very tight schedule the next morning, one that would require Joe Schmidt-like precision in planning and execution. Doffing my cap to the poet’s seated likeness, I kept walking.

Kavanagh was accidentally central to both parts of Sunday’s challenge. The first would involve running the St Patrick’s Fest 5k road race in Dublin, starting at midday. The second meant getting to Inniskeen for the Monaghan-Roscommon National League football game, with the throw-in 2pm.

This was just about feasible, as confirmed by AA Roadwatch’s Route Planner. Besides, I knew a short cut into Kavanagh Country that would not only cut five minutes off their calculations, but would also avoid match traffic and allow parking close to the ground.

So at noon on Sunday, I took my place at the starting line of the 5k which, like the finish, was on St Stephen’s Green.

From there, the course wound through that semi-autonomous Dublin enclave known as Baggotonia, where Kavanagh and many other Bohemians sought asylum over the years.

On a windy March afternoon, it proved sympathetic to runners too, shielding us along most of the route with four-storey Georgian buildings. Only out on the canal front could the south-westerlies do their worst. Sure enough, they were in our teeth by the time we passed the bronzed poet who, with his back turned to us, was not much encouragement either.

The sculpture’s indifference would have been out of character for the real-life Kavanagh.

He was an enthusiast for most sports, from GAA to pole-vaulting. Although it was far from such circles he was born, he once even volunteered for a charity cricket match in Trinity College and, with typical optimism, promised to “break the windows of the Kildare Street Club”.

But even without his support, I somehow finished my 5k within the allotted timeframe.

And after another sprint through the Green to the Mansion House, for the commemorative T-shirt and a coffee, I set off with my 12-year-old navigator on the second leg of the day’s adventure.

When Kavanagh first visited Dublin in the 1930s, travelling on foot, the trip from Inniskeen took him nearly three days.

Thanks to the M1, which covers much of the route, you can now drive it in little over an hour. So by the time we got to Ardee on Sunday, there were still 15 minutes to throw-in and my plan remained just about intact.

This was where I said goodbye to the AA-recommended route and headed cross-country into darkest North Louth, where there was a network of boreens that would take us into the back of the Inniskeen GAA pitch, via a townland called Callanberg.

Callanberg has a minor literary fame, because it was home once to a certain John McEneaney, “the Bard of Callenberg”, who played John the Baptist to Kavanagh’s messiah.

Actually, as the latter told it, McEneaney remained the established poet in the area even during Kavanagh’s time there. Whenever epic verses were required – as, say, on the occasion of a famous football victory – the Bard would always oblige. The young pretender was superfluous.

But as it happens, we did not quite get to visit Bard of Callanberg Country on Sunday. Instead, thanks to my intimate knowledge of local roads, we were soon lost. First our route started to grow grass in the middle – never a good sign.

Then we nearly drove into a farmyard. And even when we escaped this ignominy, it was only to find ourselves back on the AA-approved route. The shame of it.

On the plus side, there was no match traffic there, because the game had now started.

But from the place we had to park and start walking, the pitch was still only a distant rumour.

Ominously, we had yet to hear any crowd noises when a passing driver took sympathy on us and offered a lift.

So much for my precision planning. By the time we finally reached the ground, it was nearly half time. The scoreboard already read 10 points to 8 in favour of the home team, and as it did so, I detected a note of sarcasm.

1 David Trimble: After the big dinner in Oslo, somebody said why don’t we party together?
2 Why are there so many angry dads?
3 Coronavirus: Warning against blame game as 46 more cases are confirmed
4 Maureen Dowd: The US president and the damage done
5 John Hume, architect of peace process, dies aged 83
Real news has value SUBSCRIBE