Fintan O'Toole: The corruption of Irish banking goes back 30 years 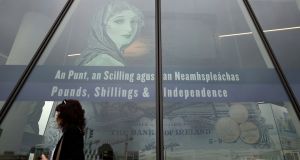 We really should have a parade. It may not be quite up there with the centenaries of the Easter Rising or the Battle of the Somme, but surely the 30th anniversary of the corruption of the Irish banking system is worth marking. It is, after all, living history, a part of what we are. The word of the moment regarding Irish banking is “culture”, but it is a euphemism for the systematic abandonment of basic ethics, of right and wrong. That started in 1987. In the previous year, the State had introduced deposit interest retention tax (Dirt) – as it went into force, the banks discovered that they could attract more deposits by allowing the local farmer and shopkeeper and doctor to sign a form claiming to be resident outside the country and therefore exempt from Dirt.

It was the most blatant of frauds – bank staff in rural towns had to pretend people they saw every day were not there at all, that they were really in Boston or Berlin or Birmingham. The lies had to be lived out as intimate, ordinary, mundane things. And they spread from the top: the great and the good of Irish life, the Jesuit boys who filled the boardrooms and the executive suites of the banks decided that these frauds were just business. They eyed each other and thought: “If we don’t do this, the other crowd will.” A rot set in and it has never been stopped.

Mark Hely-Hutchinson was chief executive of Bank of Ireland from 1983 to 1990. He was perhaps the last gentleman in Irish banking. He treated everyone who worked for him with dignity and respect. He could give a sincere Christian answer to the question of what he thought corporate government to be: “I think that very simply, that corporate governance includes behaving to your customers and to your staff and to the public the way you would like other people to deal with you.” And if we want to understand the abysmal ethics of Irish banking, we might recall the fate of one of the great lost documents of modern Ireland: Mark Hely-Hutchinson’s abortive code of conduct for bankers.

Hely-Hutchinson drew up the code shortly after he took over Bank of Ireland. It was an attempt at an ethical charter for the industry, an effort to ensure that if one bank behaved properly (by not opening bogus non-resident accounts, for example), its competitors would not undercut it. But crucially it also required the support of the Revenue Commissioners, the Department of Finance and the Central Bank. If a code of ethical conduct was going to work, these powerful State agencies had to give it serious backing.

Hely-Hutchinson had his first discussions about the code with the Revenue in 1983. As he later recalled before the Public Accounts Committee: “We produced a draft code of conduct for our own staff, discussed that further with the Revenue and with the Department of Finance and eventually we stated that we were going to do it, we were going to implement it unilaterally anyway, and we hoped that the Revenue would do something about making sure that other organisations followed suit.”

The Dirt scandal was the great alarm bell. But the State went back to sleep. It woke up in 2008 with an existential crisis generated by a banking system with no moral compass

But as far as pretty much everyone else was concerned, Hely-Hutchinson was a naive do-gooder. He got nowhere with the Revenue. When the Dirt fraud was being implemented through most of the banking system, he pressed the Revenue again about the code of ethical conduct. They told him “everybody had written them a nice cosy letter saying ‘of course’ but they hadn’t got any means of policing the situation and they weren’t very optimistic that it would actually happen; in other words, that other people would adopt the code of conduct.” And the Central Bank? When Hely-Hutchinson pressed it about the code of conduct, “Oh, it would have been a very, sort of, warm polite response, ‘What a pity these other people don’t have the same ethics as you do.’”

This is not ancient history. We’re still living with it. The Dirt scandal was the great alarm bell. In its report the PAC pointed to be the collective betrayal of the public interest and of basic ethical values by the boards of the banks: “Given the eminence of many of the members of the boards… it is surprising that they did not bring a greater weight to bear on the enforcing of ethical standards either within their organisations or the banking sector generally.” But when this alarm went off, the State threw the clock at the wall, turned over and went back to sleep. It woke up in 2008 with an existential crisis generated by a banking system that had no moral compass, that knew no boundaries.

And we’ll do this again and again – frauds followed by vague wailing about “culture”, followed by more frauds. The only culture that really matters is the culture of impunity. When a system has no ethics, when it does not know right from wrong, it has to be educated. There might have been a time when a code of ethics would have imparted the necessary lessons. Now, the only code that will make a difference is the criminal code.