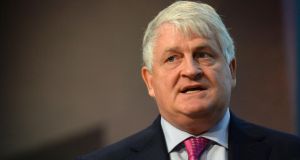 ‘I don’t know what the definition of public interest is.” Thus said Alan Dukes, former chairman of Anglo Irish Bank/IBRC on Morning Ireland yesterday. Dukes was appointed as “public interest director” at Anglo in December 2009. Says it all really.

The definition of excessive private power is that it ceases to be private. It has an impact on the public realm of democracy. Denis O’Brien has accumulated excessive private power. He has been allowed to take effective control of the largest Irish newspaper group and of two of the three national talk radio stations.

The Moriarty tribunal report shows how his private interests intersected in an unhealthy way with the processes of public decision-making. And now, of course, his desire to control what is said about him in the media and in the Dáil has created a constitutional crisis.

But none of this is strange or startling. It is the inevitable result of an individual having too much power. That individual will always see the democratic consequences of his exercise of that power as a purely private matter.

O’Brien’s response to the questions raised by Catherine Murphy about his acquisition of Siteserv from IBRC has been a deep and obviously sincere sense of personal affront. He doesn’t see it as a public matter at all. To him, all that is happening is that some busybodies in politics and the media are poking their noses into his private affairs.

The problem is that no part of the State has done anything to uphold the other side of the argument and to protect the public interest. The High Court, in granting O’Brien an injunction against RTÉ, showed little grasp of the public interest in knowing what a bank it owns is up to.

Let’s remember that in all of this Murphy has been doing no more than her democratic duty. She is an elected parliamentarian – we pay her to do what she can to hold the State and its institutions to account.

That the persistence with which she has done this in relation to Siteserv is regarded as remarkable is a sign of how rare it is for a TD to take the job seriously. Murphy’s only agenda is the one that makes democracy function: to get some accountability for the use of public resources. If she can’t pursue that agenda we don’t have a democracy.

The State’s first response to Murphy’s attempts to do her job was disgraceful obfuscation. Michael Noonan has been around long enough to remember the beef scandals of the 1980s and the subsequent remark by the chairman of the beef tribunal, Mr Justice Liam Hamilton, that if questions had been answered properly by ministers in the Dáil, that epic and expensive inquiry would not have been necessary.

Yet his contemptuous answers to Murphy’s Siteserv questions are every bit as bad as those given by Charles Haughey’s ministers in that episode in the 1980s. If Noonan had answered the questions he was asked, the current crisis would not have arisen.

The third response was IBRC, an entity wholly owned by us, joining with O’Brien to obtain an injunction against RTÉ to prevent it from disclosing details of his banking relationship with IBRC. The absurdity here is that the same person who is carrying out an inquiry on behalf of the public (the liquidator of IBRC) joined a party to that inquiry in seeking to keep information out of the public domain.

The fourth State response is, well, nothing. The injunction and the non-reporting of Murphy’s Dáil remarks raise two huge democratic concerns. One, not widely discussed, is that they threaten the foundation of the new whistleblowing legislation.

The allegation levelled by O’Brien’s side is that the alleged information Murphy has placed on the Dáil record is “stolen” and thus illegal. If this is upheld, as it seemed to be in the granting of the injunction, all protections for whistleblowers collapse; all information given by concerned insiders will be stolen property.

The other concern is the attack on parliamentary privilege. This is a specific constitutional protection. The courts have consistently found (in the X case of 1992, for example) that when constitutional rights are threatened, the attorney general must act, independently of government, to protect them.

It should not be up to RTÉ or The Irish Times to go to court to protect the right of the people’s representatives to raise questions in good faith and of the people to read and hear what their TDs have to say. It is time for some arm of the State to show it knows what public interest means.

1 Seán O’Brien: Anger over my parents’ break-up never left me
2 Further anti-lockdown protest held in Dublin city centre
3 Sacha Baron Cohen: ‘I had to ring the alarm bell and say democracy is in peril’
4 We need to reverse our thinking on lockdown
5 Couple found guilty of murdering Irish dancer with ‘devil’s breath’ drug
Real news has value SUBSCRIBE