Behind the College Green bus ban is old-fashioned class discrimination 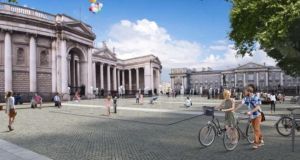 College Green in Dublin: class is very much at work in the controversy over its proposed civic plaza

Among my most treasured possessions is a letter dated December 23rd, 2010, from Mary-Denise O’Reilly of the Railway Procurement Agency. It wasn’t a personal letter; everyone living along the route of the exciting Metro North light-rail system got O’Reilly’s thrilling missive:

“2010 has been a significant year for Metro North. An Bord Pleanála approved the Metro North Railway Order on October 27th. RPA now has permission to build a light rail system which is 16.5 kilometres long and serves 14 stops from St Stephen’s Green to Estuary in Swords. The Department of Transport has confirmed that the construction of Metro North has been allowed for in the National Recovery Plan. RPA has completed the tender process for the first enabling works contracts and is ready to sign contracts for these in the New Year . . . We want you to be confident we can deliver this project safely and be a good neighbour during the works.”

I was 52 when O’Reilly delivered this fabulous news. If all goes to plan (and what could possibly go wrong?) when Metro North (now rebranded as New Metro North, even though there was never actually an Old Metro North) carries its first passengers, in 2027, I will be planning my 70th birthday party.

It is just as well that life expectancy is improving: if you were 70 in 2005, when Metro North was first announced, you’ll be 92 by the time you can take the ride to Swords. It was unveiled in 2005, shovel ready in 2010, postponed indefinitely in 2011 by the transport minister at the time, Leo Varadkar (at a cost of €150 million in written-off preparatory works and compensation to contractors), and reannounced in 2015.

Dublin’s transport infrastructure is not just about getting people from A to B. It’s also about the As, Bs, C1s, C2s, Ds and Es of social-class gradations

This tells us a lot about public governance in Ireland, the cycles of boom and bust, binge and purge, the inability to set even medium-term goals and stick to them. But it also tells us something about an aspect of Irish society we don’t like to talk about: social class. Dublin’s transport infrastructure is not just about getting people from A to B. It’s also about those other letters used to categorise people: the As, Bs, C1s, C2s, Ds and Es of social-class gradations. And class is still very much at work in the controversy over the proposed civic plaza on College Green.

The Metro North project was sold politically as a link between Dublin Airport and the city centre. And this is indeed important: of the 20 busiest airports in Europe, only two do not have a direct train to the city they serve. One is Palma, in Majorca; the other is Dublin. But in fact it has always been the case that 80 per cent of the passengers would not be travelling to and from the airport. They would be people who live in working-class and lower-middle-class areas: Ballymun, Dardistown, Fosterstown, Swords, Seatown.

These areas are mostly in the fastest-growing part of Ireland, Fingal, a region that also has Ireland’s youngest population. If there was a place you wanted to identify as the future Ireland, it’s Fingal. Swords alone is already the second-largest town in Ireland, marginally behind Drogheda. And this growth is not sudden: it has been happening since the early 1990s. So on any objective assessment it would seem obvious that Metro North would be a priority. But these are not important places, and the people who inhabit them are not important people. They are largely invisible to national media. They are neither powerful nor picturesque. So their needs are of little account.

Dublin Bus has described the College Green proposals as socially regressive, and they are

Just last week it was announced that 17 bus routes from north and west Dublin are to be rerouted away from College Green. These would be the unloved, uncool buses that get most people – especially most working-class and lower-middle-class people – into and out of the city centre. The Luas is beautiful and the Dart runs along some of the loveliest urban coastline in Europe.

But 61 per cent of all public-transport trips taken into Dublin city centre are by bus. Dublin Bus carried 140 million passengers last year, and about 85 million of them went through College Green. But they’re not cool people; they are disproportionally less affluent. They are also disproportionally less likely to have cars, which means, ironically, that they don’t need to be offered an attractive alternative to the car.

Even before the closing of College Green to buses we can see active discrimination against bus users. Between St Stephen’s Green and Parnell Square, buses can stop only three times compared to four times for the Luas, even though the buses are carrying far more people. If and when College Green is closed, the Luas will sail serenely and beautifully through it, while the buses will have to meander around it. Stops will be farther apart – a significant issue for older people, people with disabilities and parents with young children. More stops will be displaced on to the Liffey quays, where the extremely narrow footpaths already make for very unpleasant overcrowding.

Dublin Bus has described the College Green proposals as socially regressive, and they are. For some there are transports of joy; for others there are long and winding roads.