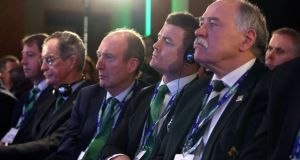 We’re nobody’s darling any more. Last evening, Ireland failed in its much-hyped bid to have Dublin named as the new location for the European Medicines Agency (EMA), which must move its headquarters from London after Brexit. Dublin also failed to get the runners-up prize of the European Banking Authority’s headquarters. Last week, Ireland finished a distant third of the three contenders to host the 2023 Rugby World Cup. An awful truth is surely dawning: the great welcome we have for ourselves is not entirely reciprocated even by our nearest neighbours. The currency of Irishness is dropping even faster than sterling on the international exchange of soft power.

We’ve lost the allure of the exotic but failed to replace it with the attraction of efficiency. It’s very hard to be both one of the most globalised economies in the world and what the beer ads used to call “magical mystical Ireland”. Indeed, even what’s left of magical mystical Ireland is thoroughly globalised and commercialised. The small cabin of clay and wattles made to which visitors were meant to be drawn by Bob Geldof’s lovely reading of The Lake Isle of Innisfree in the Rugby World Cup bid video has been rented out to 20 tenants at €500 a month each. All of our bids traded on “history and culture” but other places have histories too and almost all of them invest far more in their cultural facilities than we do.

11 Letter from Saudi Arabia: ‘The Irish here are all in the same boat’

12 Messi’s red-card outburst the act of a desperate, hopeless man

15 ‘I got a burning smell in my nose’: Third-wave Covid-19 patients share their experiences

22 Is paying someone to clean your house the last word in middle-class privilege?

23 Ireland is 13th most expensive place to live, survey shows

24 Homeschooling is an utterly unworkable solution for so many

25 Joe Biden’s presidential inauguration: Where can I watch, and what are the key moments?

27 Away: After all those cheap and nasty children’s movies, here’s a gem

30 Nuns who ran the Bessborough home in Cork sold part of site for €6.85m

31 ‘I’m the meme queen’: A QAnon digital soldier marches on

35 The Offload: Ronan O’Gara more than willing to take a punt on Jack Crowley

39 Covid-19 advice sent by text to 1,511 arrivals from Brazil amid new strain