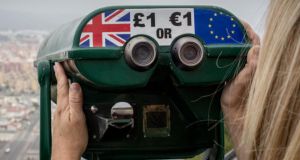 Eyes on Gibraltar: the enclave’s 34,000 residents voted 96 per cent to remain in the EU. Photograph: Matt Cardy/Getty

Some of the titles still on the shelves of the old Garrison Library in Gibraltar: Charles Mayer’s Jungle Beasts I Have Captured; GP Sanderson’s Thirteen Years Among the Wild Beasts of India; the Maharajah of Cooch Behar’s Shooting in Cooch Behar: A Record of Thirty-Seven Years of Sport and my favourite, Major AE Wardrop’s Modern Pig-Sticking.

The library was founded in 1793 and remained as a refined retreat for the officers of the British military garrison until 2011. Inside the elegant Georgian building, there is a stellar gathering of historians at a conference called Bordering on Brexit, itself part of a wider project called “Embers of Empire”.

1 Mike Murphy: ‘I won’t do another over-70s lockdown’
2 Police in Australia search for Kildare man previously jailed for killing student
3 Prof Sam McConkey: This is the beginning of the second Covid-19 wave in Ireland
4 The far right rises: Its growth as a political force in Ireland
5 Fintan O’Toole: It is June 24th, 2025 – and Brexit has worked
6 Coronavirus: Public health experts considered idea of moving Dublin to Level 4
7 32 arrested at anti-lockdown protest in London
8 ASTI to ballot for industrial action over Covid-19 safety concerns
9 Saracens’ emphatic opening salvo enough to keep Leinster at bay
10 David McWilliams: Johnson’s UK and Milosevic’s Yugoslavia – spot the difference
11 The secret to an airy and light scone with a pillowy interior
12 Golf group insist they adhered to public health guidelines during Tullamore trip
13 President Higgins announces death of his dog Síoda
14 Policing Covid-19: What enforcement powers do gardaí have?
15 The five lies we told ourselves about coronavirus
16 Coronavirus: 274 more cases but further spike ‘not inevitable’
17 Blanchardstown, Tallaght top table for highest Covid-19 rates
18 Ross O’Carroll-Kelly: ‘They want us to vacate this place so they can use it as a love shack?’
19 Aldi empire wracked by family feud
20 Next stop the Champs-Elysées in green for Sam Bennett
21 Ireland facing at least another year living with Covid-19 - Taoiseach
22 Cuties controversy: If you haven’t seen it, you don’t know what you’re talking about
23 Garry Ringrose: Leinster’s defeat to Saracens is ‘heartbeaking’
24 Wife not entitled to deceased husband's entire estate, High Court rules
25 Life in Level 3: What will happen under new restrictions in Dublin?
26 Covid-19: Archbishop of Dublin voices worry about parishes trying to ‘get Confirmations done’
27 Born to ride, born to win: Sam Bennett, the making of a green machine
28 Matthew Wolff leads US Open but Rory McIlroy is among the chasing pack
29 Explainer: What the hell is going on with Brexit again?
30 Plant bulbs now to nourish bees and bring spring joy
31 How to have a happy Halloween, Christmas and St Valentine’s this winter
32 Judge’s death raises possibility of third Trump nominee to US supreme court
33 Lance Armstrong’s latest move serving him well on many fronts
34 Coronavirus: Dublin to remain under Level 3 until October 10th - Taoiseach
35 EY Entrepreneur of the Year awards: meet four industry finalists
36 Why are some in Fianna Fáil unhappy with Micheál Martin?
37 Róisín Murphy: If I want to be famous I can just go to a gay club
38 TV guide: 29 of the best shows to watch this week
39 UCD professor asked to resign from EU committee over Covid-19 claims
40 Dutch government honours Irish veteran of Battle of Arnhem
Real news has value SUBSCRIBE