The same cannot be said for the 220,000 Americans the virus has killed so far 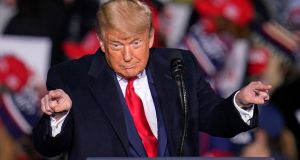 US president Donald Trump’s campaign now consists primarily of showing himself to his people and inviting them to bask in the wonder of his resurrection. Photograph: Gene J Puskar/AP

‘His Majesty’s health has never been better.” This is the closing line of the bulletin of the Grand Armée of Napoleon Bonaparte, dispatched, on its catastrophic retreat from Moscow, on December 3rd, 1812.

It reached Paris 15 days later and only two days ahead of the arrival of the emperor himself. Napoleon had led the largest army then assembled in Europe to its destruction. He had presided over the deaths of hundreds of thousands of people. But his health had never been better.

8 Gordon D’Arcy: Time for IRFU to be bold and secure futures of prized assets

11 Covid-19: AstraZeneca has told HSE vaccine deliveries can be expected by mid-February

13 Fontaines DC are reborn as punk-funk disconauts, and the results are cracking

19 Joe Biden to be inaugurated as 46th US president

22 Baked spuds get a tasty, crunchy filling and topping

23 Man who sexually assaulted woman on Luas tram is jailed

24 What can Ireland expect from Joe Biden?

26 Hybrids? Plug-ins? Everything you need to know about electric cars

29 Gorgeous terrace turnaround is right on track for €445k

30 Could talking spread Covid-19 as much as coughing does?

32 ‘I got a burning smell in my nose’: Third-wave Covid-19 patients share their experiences

34 Michael Harding: Talking to strangers. That’s what I miss

36 The best independent Irish craft beers, as voted by brewers

40 What are Joe Biden’s Irish roots?