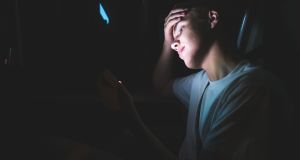 Never before in our history (indeed in all of human history) have children been given access to unlimited amounts of extreme pornographic imagery. Photograph: iStock

Not much is really new. The things we call unprecedented usually aren’t. But the sentencing of two children for the murder of a child is genuinely unprecedented in the history of the State. It is the bleakest kind of novelty, an event so terrible that it repels any attempt to understand it – but also an event so terrible that we have to try. In particular we have to ask whether this new thing is related to another novelty: never before in our history (indeed in all of human history) have children been given access to unlimited amounts of extreme pornographic imagery. We are doing something to our kids that has never been done before. Does it inevitably have consequences we never experienced before?

The paradox of a story like this is that the more extreme the language we apply to it, the more comforting it seems. The tabloids had the front-page slogan ready to scream at us: CHILD MONSTERS. To which we can only say: if only. If only this were all about monsters. Monsters are freaks of nature, born not made. They are natural disasters – they just happen. They come pre-wrapped in big, empty words: horror, evil. What they do is a matter of luck. Someone has the extreme misfortune to be the victim, but there is no accounting for luck.

There is in this story no parallel universe, just ordinary Irish suburban middle-class life. There is no Them, just Us

A more humane version of this way of thinking is to assume that children who can do such things are themselves horribly damaged by abuse and violence and physical or emotional neglect. This too is terrible to contemplate, but also grimly comforting. Because of what has been done to them, these kids are not like our kids. They exist in a parallel world of pain from which the damaged child emerges in turn to do damage. We know, or think we know, where we are – inside the universe of normality that is invaded by these alien visitors from beyond the pale.

But this case is not like that. The deed is monstrous but there is no evidence that the children who committed it are. They come from normal, loving, stable middle-class homes. So far as we know, no one in their families, their schools or their community thought of them as anything other than ordinary – a bit gormless, perhaps, but so are lots of 13 year olds. They are bright kids, healthy, well-minded, much loved. And this of course is where the real terror lies. There is in this story no parallel universe, just ordinary Irish suburban middle-class life. There is no Them, just Us. These kids could be the children or grandchildren of any Irish Times reader.

So we have to ask: is this a terrible but one-off event or is it a symptom of a larger and even more disturbing change? We have to try to approach this question calmly. We have to avoid drawing huge conclusions from very rare events. Consider, for example, a case that is, if possible, even more shocking: two six-year-old boys undressing and then beating to death a five-year-old girl. It happened in Norway in 1994. One of the kids mentioned Teenage Mutant Ninja Turtles in an interview with police and there was serious political discussion in Norway and elsewhere about whether to ban or strictly regulate videos of that show and other cartoons like Power Rangers. This was, in the circumstances, a rational and considered response. But in retrospect it looks more like an understandable but misplaced attempt to find some comfort in an easy explanation and to be able to do something, anything, to reassure society that this terrible thing could be prevented from happening again.

We have been sleepwalking into a new world while our children are already out in it, wandering without maps or boundaries

We have to keep this is mind, however hard it is to retain perspective in the face of such awfulness. The desire to “do something” can lead us into responses that are at best useless, at worst counter-productive. And yet we also have to face the obvious: hard core porn is not Teenage Mutant Ninja Turtles. Just because, in the past, child murders have led to moral panics about influences we would now see as relatively innocent (comics, cartoons, sex education), we cannot simply dismiss the new reality we have inadvertently created. Put it this way: if, a decade ago someone had proposed to flood the brains of adolescents with endless streams of extreme, misogynistic and addictive sexual imagery as an experiment to see what would happen in those brains, would this experiment have been countenanced for one second? And yet here we are, letting our kids spend their Confirmation money on devices that do exactly that. And we have also provided them with something most of their parents never had – private spaces in which to use them without supervision.

We need a process of calm but urgent public reflection on this. We have been sleepwalking into a new world while our children are already out in it, wandering without maps or boundaries. We have had a shrill and shocking wake-up call. The Government should establish a citizens’ convention to hear evidence from experts in psychology, technology, and child protection and deliberate on what can be done to create those boundaries. It is time for us to be responsible adults.