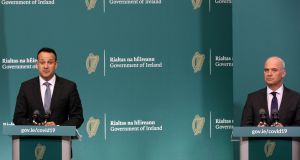 Tánaiste Leo Varadkar claimed that Nphet’s advice to switch to Level 5 was not thought through. Photograph: Sam Boal/Rollingnews.ie

“Following the science” became the phrase du jour across the world as the Covid-19 pandemic began to take hold. We were confronted with claims that pandemic policy was being guided purely by “the best science available” and in the process the messy, complicated reality of handling Covid-19 has elided into a false dichotomy.

The argument, so it seems, is that there are just two routes available: one, in which you “follow the science” and everything works out fine; and the other, whereby you reject the science and unleash untold chaos on to society.

The danger of this simplistic reasoning revealed itself to us amid the row between Government and the National Public Health Emergency Team (Nphet) at the beginning of this week. A leak on Sunday evening indicated that Nphet was advising the Government to move to Level 5 of its pandemic response – just short of a full nationwide lockdown. The Tánaiste Leo Varadkar did not mince his words: the public health advice “hadn’t been thought through”; it “came out of the blue”; and the Government needed to take a wider view on lockdown, considering the impacts on employment, business, social isolation and mental health.

There was a serious breakdown in communication that needs to be addressed (leaking public health advice that calls for a lockdown on a Sunday night with no apparent Cabinet consultation is certainly a creative strategy). But the technicalities of how the row played out are in fact secondary.

What we are witnessing is how science and politics interact or, in this case, collide. There was subsequent outrage from certain factions in the Dáil and disquiet on social media that Varadkar would so brazenly and publicly disregard scientific evidence, but we ought to be careful to consider the substance of the dispute.

Challenging scientific advice is not necessarily a bad thing. “Following the science” may have been a convenient PR slogan for governments as they justified early steps in March and April – but the consequence was a dangerous one that has prohibited us from understanding that responding to a pandemic is an exercise in balancing competing obligations. If the country in the midst of the Covid-19 crisis is a machine, “the science” is just one cog among many.

Not least because there is a litany of considerations that inform scientific advice. There are technical disputes on methodology; the context changes as we learn more about the disease; scientists are liable to disagree with each other; and science does not exist independently of social concerns.

And all of this comes before the advice of Nphet is refracted through politicians who have to make complex policy decisions. These decisions must incorporate not just concerns about how to stop the spread of the virus, but medium and long-term assessments about the indirect impacts of a lockdown; about preserving societal cohesion; protecting an economy likely to be on its knees in the not-so-distant future; assessing not just who is the most vulnerable to coronavirus but also those who suffer in the collateral damage; and the seemingly frivolous but no less serious concern of facilitating some form of livelihood for citizens beyond the four walls of their home.

But reinforcing the false dichotomy between “following” and “rejecting” science may cause harm in the long run, by giving the public the incorrect impression that the path to navigating the pandemic is one lit solely by a neutral, objective and incontrovertible scientific process; that so long as we listen to the science (as though the science is a homogenous, unchanging entity not subject to opinion or value judgment) everything will be okay.

The effect of this is simple: when the Government challenges the scientific advice it is seen as reckless, wanton endangering of public health rather than – as in the case of Varadkar and the Government rejecting Level 5 – making difficult policy decisions that take in a litany of considerations and require a series of value judgments.

It is true that sometimes challenging the science might be more malign: governments are rarely not thinking about the next election, so polling concerns will have some influence – and some decisions will be predicated on predicted-electoral fate.

The UK’s foolish decision to not join the European Union’s PPE procurement scheme was in a small sense designed to reassert the prime minister Boris Johnson’s political project of Brexit “come what may”. He did not want to be seen by vast swathes of the Conservative constituency to be reneging on the UK’s ideological and practical distancing from the EU.

But it is too cynical to believe all policy-making – especially decisions deemed to “go against” the science – finds its basis in selfish political interest. The Government has competing obligations and the long-term harm caused by entering a lockdown at the wrong stage may outweigh its short-term benefits.

Science should inform the foundation of any government response to a pandemic. But ideological commitments, economic assessments and social concerns ought to inform how this advice then becomes policy. Pretending that is not the case leads us down a dangerous path.