Unionists have little grounds for complaint over likely shape of Brexit 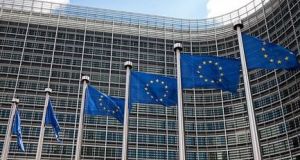 As regards symbolism, which counts for so much in Northern Ireland, the European flag, part of many people’s complex identity, will cease to have any official standing in the North. Photograph: Getty Images

As the Brexit negotiations trudge towards their fractious denouement, one important point regarding Northern Ireland seems to have been entirely overlooked, namely the real nature of the balance between unionist and nationalist aspirations as reflected in the arrangements for the UK’s departure from the EU.

This should now be a theoretical question. The EU and UK, working together, have agreed and ratified the Northern Ireland Protocol precisely to preserve, insofar as Brexit permits, the delicate equilibrium of the Good Friday Agreement.

However, there are two urgent reasons for us to look again at whether Brexit, as it is now shaping up, will tilt the scales, as many unionists seem to believe, towards deepening the “all-Ireland dimension” in a way that is anathema to them; or whether rather it might lean towards copper-fastening Northern Ireland’s place in the UK, contrary to nationalist objectives.

Acceptance of those two sets of equally-legitimate aspirations lies at the very heart of peace and respect in Northern Ireland.

The first reason for us to reflect on the balance of what has been agreed is that perception can be crucial in Northern Ireland. Even if, in truth, the Brexit protocol represents a reasonable balance, the perception persists among some unionists that its provisions constitute a threat to their political allegiance.

The second reason to recall what has actually been agreed is that the London government has chosen to breach the legally-binding Withdrawal Agreement, and therefore international law, in order to tip the new arrangements more towards unionist sensitivities.

The question then is whether there is any basis for unionist complaints or for the Johnson government’s Bonnie and Clyde approach to the rule of law.

Unionism is not monolithic. Many unionists voted against Brexit and support arrangements to allow Northern Ireland to have what they see as the best of both worlds.

However, many others are angry with the way things have evolved. They are indignant that, as regards the Single Market in goods, Northern Ireland will remain aligned with the EU. Their wrath is exacerbated by the misleading and unhelpful phrase “border down the Irish Sea”.

They are resentful that insouciant Tory Brexiteers marched the DUP to the top of the hill only then to leave it stranded there.

Some are probably privately annoyed with themselves for supporting Brexit in the first place, with its inevitable consequences, and later for voting against Theresa May’s deal, which was more favourable to unionist concerns.

However, in assessing the balance of what has been agreed, one vital point seems to have been entirely glossed over. The fundamental fact is that Northern Ireland is leaving the EU.

The great majority of EU competencies are largely unrelated to the Single Market in goods: from the Single Market in services to the environment, from fisheries to transport to justice and home affairs. In all such areas Northern Ireland will operate not only on the same national and regional basis as heretofore but, crucially, as part of a country that no longer belongs to the EU.

The same applies to vast areas of very limited EU competence, from health to education to culture.

So while it is true that Northern Ireland under the protocol will have to accept continued alignment with the Single Market in goods, this is balanced by the fact that the majority of Northern Ireland voters are being dragged out of the EU against their will, with an impact across a much wider range of areas.

As regards symbolism, which counts for so much in Northern Ireland, the European flag, part of many people’s complex identity, will cease to have any official standing.

Moreover, the Withdrawal Agreement explicitly confirms the constitutional position of Northern Ireland as part of the UK.

Many unionist voices recognise that the agreed post-Brexit arrangements can bring significant economic benefits to Northern Ireland. I do not belittle the issues of allegiance, identity and consent. However, it is important to point out that the future is not as gloomy for unionists as is frequently portrayed. If anything the UK’s departure from the EU will have a greater impact on nationalist, moderate unionist, and cross-community aspirations.

Finally, it is worth noting that Northern Ireland’s future influence in relation to the limited number of issues on which it will remain aligned with the EU will be significant. Through the new agreed committee structures it will be able to make its views known both directly to the EU and through the British government. It will also have an additional channel for influence through Dublin.

The idea of exercising influence through Dublin may be unappealing to many unionists. However, Northern Ireland’s influence on issues of concern is likely to be greater than it has been through London alone. It will have a very sympathetic ear in Brussels.

1 Cork shootings: ‘Devastation was impossible to imagine’, funeral hears
2 Storm Aiden prompts nationwide weather alerts for Halloween
3 US election: ‘Trump would not be caught dead here unless he wanted our votes’
4 Strong earthquake with a magnitude of up to 7 hits Turkey and Greece
5 ‘Attention-seeking’ Shane Ross has a spiky joust with Regina Doherty
Real news has value SUBSCRIBE