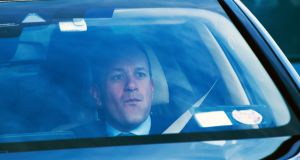 Taoiseach Leo Varadkar. ‘By focusing on abstracts such as Brexit, and appealing to people’s self-interest by pitching tax cuts, Fine Gael has laid out its stall.’ Photograph: Colin Keegan/Collins

Fine Gael’s first week of campaigning solidified its sense of detachment from the electorate, which has also been a characteristic of its two successive governments. The party’s opening message, which banked on Brexit management as the party’s main talent, is not a vote-getter. Brexit will not be the burning question on the doors. Neither is the electorate enthusiastic about Fine Gael’s negative campaigning and juvenile attacks on Fianna Fáil, online and off. Now would be a good time for the party’s young establishment to grow up.

The government’s term may have been defined by Brexit, but it’s hard to believe that any other party or coalition in power would not have also tried to get a good deal for Ireland. Most of all, the fundamental awkwardness with centring Brexit in a campaign is that Brexit hasn’t happened yet – but the housing crisis sure has. People don’t necessarily know how Brexit will affect them, but they certainly know the impact of dealing with hospital waiting lists and relatives on trolleys.

1 Murder in a crowded house: The full story of the Patricia O’Connor trial
2 Shane Ross: ‘I lost a friendship with Mattie McGrath completely. He got totally personal’
3 Britain is uncomfortable because Ireland has the upper hand for the first time
4 Soreness is good, scales are pointless: The 10 biggest myths in fitness
5 Coronavirus: Aer Lingus cabin crew in self-isolation after passenger’s positive test
6 Areas advised to ‘stop everything’ as Storm Jorge hits Ireland
7 ‘Nobody cares’: Children freeze to death as Syrians flee onslaught in Idlib
8 Coronavirus global risk warning raised to ‘very high’
9 Fianna Fáil and Fine Gael fear they are in a lose-lose scenario
10 Coronavirus: Myths that have gained traction
11 Photographs of the year: PPAI awards selection
12 ‘I woke up the next day in a guy’s house covered in bruises’
13 Status red ‘severe’ wind warning issued for Galway and Clare as Storm Jorge approaches
14 Suspicions rife as key Brexit trade talks begin in Brussels
15 Joshua Allen jailed for 15 months for drugs offences
16 Tree-felling ‘conscientious protector’ convicted of timber theft
17 Bank leaked my loan request to family who tried to rip me off
18 Horse owners embarrassed ‘perfectly good’ stallion sent for slaughter, court told
19 ‘I had to tell my mum not to say that as it means something else’
20 Paraic O’Donnell: MS is meticulously destroying me. I am being unmade
21 Miriam Lord: Lofty Leo and pals look back with misty eyes
22 Coronavirus: Communist Party mask has slipped as Chinese endure lockdown
23 Rapist treated drunk schoolgirl ‘like a dog’, judge says
24 Northern Ireland is united in annoyance at Republic’s ignorance on Sinn Féin
25 End of the real Jack Reacher? Lee Child passes pen to his brother
26 10 things I’ve learned in 12 years living in Spain
27 David McWilliams: ‘I’m all right Jack’ politics has fuelled the rise of Sinn Féin
28 Two Irish-born children lose appeals over asylum and protection process
29 Coronavirus: Where should you sit on a plane to avoid infection?
30 Man (21) jailed for inflicting ‘catastrophic’ injuries on baby girl
31 Ryan Baird scores a hat-trick as blue wave rolls over Glasgow
32 The who’s who in the Patricia O’Connor murder case
33 ‘Let’s burn Amber’: Johnny Depp’s alleged threat to ex-wife
34 Netflix: 10 of the best new shows and films to watch in March
35 Larry McCarthy to become first overseas president of the GAA
36 World health body raises coronavirus risk alert to ‘very high’
37 High-speed rail in Ireland: let's think big to solve our housing and transport mess
38 Rita Coolidge’s tales of pain and hedonism from rock’s inner circle
39 Technology can hurt students’ learning, research shows
40 2020 International Booker Prize longlist revealed
Real news has value SUBSCRIBE