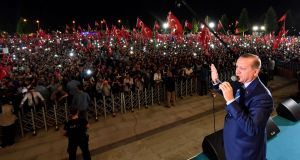 Well, not exactly. Truth is the poorly planned coup by a small section of the army, some of whom thought they were on official manoeuvres, was relatively easily ended by loyal troops and a street mobilisation of supporters of President Recep Tayyip Erdogan.

Although 250 died, at no point was he seriously in jeopardy. But the official embellishment by Erdogan of the scale and import of the coup serves a crucial political purpose in legitimising the breadth of the crackdown in its aftermath and the elevation of autocratic Erdogan’s status as national saviour, a second Kemal Ataturk.

At a million-strong rally against the coup in Istanbul last weekend, the “democracy and martyrs” rally, prime minister Binali Yildirim made no bones about it – the coup had unified the country. “Every coup which does not kill us, makes us stronger. Just like here and now.”

It was a major opportunity for Erdogan to reshape his “new Turkey” with Islam firmly at its heart. Paying tribute to Ataturk, Erdogan made clear Turkey was moving beyond the state’s founder and his secularist vision.

As one columnist put it, a new “national mythology” emerged: “The nation has been redefined as the people out in the streets resisting the coup on the night of July 15th.”

The official coup narrative has fed off Turkey’s relish for conspiracy theories – usually foreign-inspired – in attributing huge significance and power to Fethullah Gulen, the Islamic cleric based in Pennsylvania, who supposedly orchestrated the entire event at the behest of the US. In self-imposed exile since 1999, Gulen runs a vast global enterprise of schools, businesses, media groups and charities encompassing millions of followers.

His supporters, it is well-accepted, have heavily penetrated key parts of the army, judiciary, prosecution services and education. It is a network at least 56,000-strong, whose members the government claims to have identified as users of a secret messaging app, ByLock .

Arrest lists had been drawn up prior to the coup and, within days, they were able to move against 60,000 alleged Gulenists – 16,000 formally arrested, with purges of 1,500 judges and prosecutors and some 42,000 employees of the education ministry. Some 1,043 private schools and 15 universities have been closed.

In Turkey nearly two-thirds believe Gulen was behind the coup. His extradition from the US is widely backed and the government’s story has been swallowed whole by most of the secular and nationalist opposition, no natural friends of Erdogan, but with their own reasons for fearing and distrusting the Gulenists.

Yet if the conspiracy was so extensive, why was it so easily blocked? There is another version of the story counter to the Erdogan narrative. Instead of seeing the defeat of the coup as a valiant stand by him in defence of democracy, it sees it as the playing-out of an intra-Islamic and nationalist power struggle, a culmination of a battle between rivals, once allies, for power and unfettered access to lucrative state business contracts. The coup Erdogan defeated was not July 15th but a far older, creeping, silent coup by the Gulenists whose infiltration of most of the key levers of state power goes back to an infiltration process begun in the 1970s.

Until 2012, that infiltration and specifically the clout wielded by the Gulenist judges and prosecutors against the secularist, Kemalist military suited and was encouraged by the AKP from its ascent to power in the early 2000s – many Gulenist officers arrested after the coup had entered and risen in the military after the Gulenist-organised show trials of Kemalist officers in 2008-2011. Erdogan, not one to admit faults, says now he had been duped at the time and the court verdicts were eventually overturned.

But, as the balance of power shifted decidedly against the old military, there was a parting of the ways between the Gulenists and AKP. Political differences over peace talks with the Kurds which Gulenists oppose, and the latter’s moves against corruption in Erdogan’s entourage – seen by some observers as a row over the division of the spoils of office – were the final straw

No evidence has yet been adduced of direct Gulen involvement in the coup, although much has been made of the extent of his secret network. It appears more likely that it was a pre-emptive strike by sympathetic officers acting on their own initiative ahead of an expected purge of the army by Erdogan.

But the ill-planned coup was a wonderful opportunity to purge far more widely and consolidate his control of the state. Erdogan has not found a new enthusiasm for democratic methods – his new secular allies should sup with a long spoon. Their turn will come.