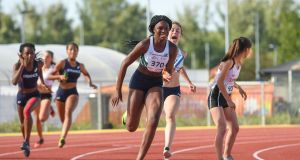 At 7pm tonight, all sporting eyes will be on Brazil and their talismanic striker, Neymar, as the Seleção hope to progress to the World Cup quarter finals.

At 7pm tonight, my eyes will be on Irish sprint sensation Patience Jumbo-Gula as she goes for a gold medal in the final of the 100 metres at the European Under 18 Championships in Hungary.

Apart from the start time of both their events, there’s something else that links the global sporting superstar from São Paulo and the 16 year old from Dundalk. Their skin colour - and the reaction to it.

Neymar may be much discussed this World Cup for his gymnastic tumbles whenever an opponent so much as looks at him, but back home in Brazil he still hasn’t been forgiven for a remark he made about race when he was 18.

Asked if had ever experienced racism while playing, Neymar replied “Never. It’s not like I’m black”.

As the journalist Cleuci de Oliveira so eloquently put it in the New York Times this week: “his answer was heard like a record-scratch across the country”.

Brazil prides itself, and promotes itself, as a racial democracy - a “pigmentocracy” even. Neymar is the son of a black father and a white mother but his remark was like a slap in the face to many Brazilians as it highlighted the “colourism” that still infects Brazilian life - the white minority enjoy a disproportionate amount of power and wealth in the country.

Patience Jumbo-Gula, along with her compatriots, Rhasidat Adeleke from Tallaght and Gina Akpe-Moses also from Dundalk are already been talked about as being the new Golden Generation of Irish athletics.

Any informed voice will tell you that the next time an Irish athlete mounts the victory podium at a World Championships or an Olympics, their name won’t be Gráinne and they won’t have milk-bottle white skin.

Our three sprinting stars are all black. Already though you can hear the behind-the-hand mutterings that the three enjoy a “genetic advantage” over “native” Irish athletes.

The three sprinters are all the children of migrants to this country. When Gina Akpe-Moses became the first Irish woman to win a European sprint gold medal last year in Italy, she said that standing on the podium and hearing Amhrán na bhFiann being played was the proudest moment of her life.

What this World Cup and current Irish sporting success stories are now explaining to us is that monolithic notions of race, culture and nationality are not fit for purpose anymore.

Today at Wimbledon, an “Irish” tennis player will be trying to battle her way into the 4th round of the tournament - already this week she has gone further than any Irish tennis player has ever gone before at a Grand Slam.

Vitalia Diatchenko may be Russian by birth but she has been living in Dublin for the last eight years and the shots that saw her sensationally beat Maria Sharapova last Tuesday in the first round of Wimbledon were learnt and honed on the northside Dublin tennis courts.

Following standard protocol in these matters, we have now claimed Diatchenko as one of our own. And sorry Vitalia, but it’s a non-refundable deal.

We also have a very strong claim to one of the most exciting talents on the men’s side of the game. The fast-improving Michael Mmoh has a mother from Co. Monaghan and a father from Nigeria.

The tennis hot-shot is more than qualified to represent Ireland in international tennis tournaments - and certainly a lot more than some of the others who have lined out for us before. The problem here is he also qualifies to represent Nigeria, Saudi Arabia, the U.S. and Australia.

Mmoh is the perfect illustration of how far we have moved from the time when the question “Where are you from?” had a one-word answer.

If migration is the burning political issue of the day - and the fear of it responsible to some degree for both the Brexit vote and the election of Donald Trump, then we need to update our terms of reference.

Nationality, identity, citizenship and heritage are no longer an “idée fixe” - no longer the binary certainties of old.

At this World Cup we have seen a Swiss football team with more players of Kosovar and Cameroonian heritage than what some would call “indigenous” Swiss players.

You could assemble a 27 man soccer squad of footballers born and bred in France who competed in this World Cup for countries other than France.

In specific Irish terms, the captain of the English cricket team, Owen Morgan, is a proud Dubliner.

A New Zealander of Samoan heritage, Bundee Aki and a white South African, CJ Stander, both excel while wearing the Irish rugby jersey.

Within ten years time it is very possible there will be a winning GAA captain of Pakistani or Syrian heritage lifting the Sam Maguire cup in Croke Park.

There will always be those, though, who cleave to the redundant definitions of nationality and identity - and they are by no means not just the waddling white trash of any given European country using the cover of patriotism to disguise their ignorance.

The more our sprinters win, the more the mutterings increase; some English people will never accept Owen Morgan as their cricket captain (using Norman Tebbit’s infamous “Cricket Test” of nationality as guidance) - equally, some Irish will always regard him as a “traitor”.

When Bundee Aki was selected to play for the national team, a tweet from an Irish rugby account asked “On a scale of CJ Stander to Guinness, how Irish is Bundee Aki?”.

But we of all people know how elastic the term “Irish” is - we have seen many iterations of “Irishness” over the years from never-been-near-the-place-but-qualify-for-a-passport Irish to the not-Irish-at-all-but-sure-look-it Irish - aka the Tony Cascarino precedent.

Today on an athletics track in Hungary we will watch Patience Jumbo-Gula going for gold.

And on the tennis courts of SW19 let’s hope that northside Dub Vitalia Diatchenko suffers no ill effects from the figurative branding iron we’ve been using on her all week.