Election is about much more than Fine Gael and Fianna Fáil 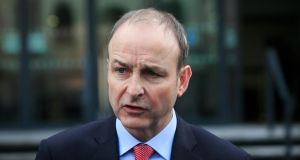 The ball may not have been thrown in yet, but the players are already jostling and digging each other in the middle of the field. Even now some of the most important – and possibly decisive – questions of the great game are becoming clear.

It has been clear for some time that Fine Gael will target Micheál Martin personally in the next election, and that particular aspect of the campaign plan has gotten off the ground early. During Martin’s RTÉ radio interview on Monday, Minister for Health Simon Harris was tweeting vigorously, reminding his readers that the Fianna Fáil leader was a member of the Cabinet that oversaw the EU-IMF bailout in 2010, and that he was a “TD since the Haughey era”.

This has two purposes: firstly to undermine Martin’s – and Fianna Fáil’s – appeal as the party of change. Fine Gael has led the government for nine years; to win a third term will be difficult, because winning a three-in-a-row is very difficult. It happens rarely. The second purpose of the attacks on Martin is to focus attention on Fianna Fáil’s record in government during the economic crash and contrast it unfavourably with the economic recovery under the Fine Gael-led governments. Fine Gael doesn’t just believe this will be effective; the party’s Ministers and TDs immensely enjoy doing it. So you can expect plenty more where that came from.

Attacking Martin’s record is perfectly legitimate, even if it rather glosses over the fact that Leo Varadkar was one of the Fine Gaelers manoeuvring for a coalition with Fianna Fáil after the last election. But it’s not a positive reason for voters to back Fine Gael. Attacks on their opponents might be effective in damaging them, but for Fine Gael to win the extra seats it needs, it will have to present and sell a compelling and credible plan for the country’s future. Elections usually tend to be more about the future than the past. Expect Fine Gael to move on to the promise of tax cuts pretty soon.

The attacks on Martin demonstrate another important aspect of this campaign which will be apparent from the early stages – that this is probably the most intense contest between the two big parties since the days of Charles Haughey and Garret FitzGerald in the 1980s.

In 2011, Martin was running to keep the party alive (Fianna Fáil didn’t even bother to nominate its leader for taoiseach when the new Dáil met); in 2016, at the last election, he was running to re-establish Fianna Fáil as a central player in Irish politics. But this time he is a realistic contender for the first time to lead the next government; it’s a real head-to-head between him and Leo Varadkar.

Speaking on Monday, Martin stressed a message of competence and delivery of public services, contrasting it with the failures of Fine Gael in housing and health. Say what you like about Fianna Fáil, he said, but we built lots of social housing in the 1930s, 1950s and 1960s (he stopped the timeline then). This is honest enough not to present itself as a radically different alternative from Fine Gael – but rather as a pledge to run a better, more efficient, more responsive administration. The palpable frustration – and anger in some quarters – among many voters about the slow pace of Government action, especially on the two Achilles’ heels of health and housing, makes this a message to which some doorsteps are likely to be receptive.

But although they will dominate media coverage – and the television debates between Varadkar and Martin will be vital points in the campaign – this election is about much more than just Fine Gael and Fianna Fáil. Back when Haughey and FitzGerald were the central protagonists, Fine Gael and Fianna Fáil between them won 80 per cent of the vote; this year, it’ll probably be somewhere not much north of 50 per cent. The scattered archipelago of the small and medium-sized parties and the Independents present a dizzying array of political alternatives to the old firm of the Civil War rivals. But the fissiparous nature of the alternatives are their greatest weakness – though they are unlikely to top 30 per cent of the vote, the next government will be led by either Fine Gael or Fianna Fáil. Insofar as we can be certain about anything, you can chalk that one down.

The centrist, accommodative character of the big two means that when it comes to government formation, they will sit as comfortably with the Greens as with Labour, and/or with Independents of any stripe. The contest in the non-Fine Gael/Fianna Fáil part of the election is as important for the policy direction of the next government as the slugfest between the big two.

Sinn Féin will remain something of an outsider, with both big parties ruling out a coalition with the party. This is a position which may suit the party in campaigning terms – allowing it to justifiably claim the anti-establishment mantle – but it could damage Sinn Féin among those voters who seek to choose a government. It was those voters who Mary Lou McDonald hoped to woo in a way that Gerry Adams couldn’t. That project hangs in the balance in this election.

The opening days of the campaign will be a hectic cacophony of charge and counter-charge. After that, it will settle down into something more manageable and digestible, as the main issues emerge. Housing. Health. The economy. Climate change. Brexit. Change or continuity?

All election campaigns matter. They swing votes, change minds and change outcomes. With the big two pretty evenly matched in the polls and many voters likely to wait until the final week to decide, this one will matter more than most.