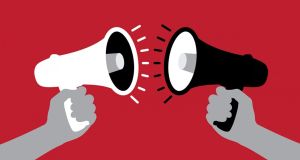 The decision by Facebook and Google to cut Donald Trump’s direct access to his millions of supporters has produced an interesting, conflicted mix of reactions from across the political spectrum. While liberals in the US have been delighted to see the social media companies belatedly beginning to police – or in the jargon “moderate” – the former president’s online presence, international figures, no less liberal, like Angela Merkel have warned of what they see as a dangerous erosion of free speech.

At issue is much more than Trump. An important timely debate over how to limit the untrammelled power of giant social media companies to dominate and shape public discourse, for good and ill, is beginning. As Dutch politician Marietje Schaake warns, “Both the storming of the Capitol and social media companies’ panicked reactions have laid bare the depth of unchecked power social media companies hold over the public debate and public safety. The balancing and weighing of rights and interests belongs with democratically legitimate decision makers. There must be accountability beyond self-regulation.”

In Ireland, news organisations hope that the issue will be among those taken up by the Future of the Media Commission which is currently meeting and is due to report this summer.

And Facebook itself has acknowledged it shouldn’t be making so many decisions about speech and online safety on its own, and that there is a need to go “beyond self-regulation” by putting the Trump decision for review before a new independent oversight board.

The board, run by an independent trust and funded initially by Facebook to the tune of $130 million, consists of distinguished international legal, political, journalistic, and civil and digital rights figures from 18 countries on six continents (including Danish ex-PM Hella Thorning-Schmidt).

It has a mandate to provide a court of appeal for decisions by the social media giant and to steer its free speech policy. The company, which hopes other platforms will also sign up to its “jurisdiction”, has pledged to abide by decisions on topics as varied as nudity and hate speech – the board has spent much of its early days discussing when nipples should be acceptable.

Among the members of both the commission and the 20-member board is former Guardian editor Alan Rushbridger.

Human rights groups complain that Facebook’s justification for taking down sites that incite to violence is applied with deep inconsistency. Is the reluctance to police hate-filled, anti-Muslim sites in India, its largest market, a function of its unwillingness to offend India’s Hindu nationalist prime minister Narendra Modi ? Virulent sectarian speech in online posts in Sri Lanka, Myanmar, Cambodia as well as Ethiopia have long been tolerated by the company. In Uganda and Iran, however, the company has taken down several sites that it says violate its community standards.

“Our policies are applied to everyone,” Sheryl Sandberg, Facebook’s chief operating officer, insists, not altogether convincingly, in a recent interview with Reuters. “The policy is that you can’t incite violence, you can’t be part of inciting violence.” But defining incitement is not easy – many legal experts in the US, for example, wonder if Trump’s lies about the election go as far as constituting incitement. Senate, please note.

If not, should the act of telling lies suffice to make a site subject to takedown? That would both pose a monumental and deeply subjective vetting challenge for platforms, and represent a serious erosion of free speech which traditionally has encompassed the right to tell lies. (Misleading people about dangerous medications or diets can be dealt with specifically.)

Rights groups fear that, inconsistency apart, autocratic leaders like Russia’s Vladimir Putin and the Philippines’ Rodrigo Duterte will seize on the willingness of Facebook to take down Trump sites to argue that they should also take down “subversive” dissident sites. Nick Clegg, the former British deputy prime minister and now a senior Facebook officer, has admitted that the company is resisting pressure from Russia over postings by opposition leader Alexei Navalny.

And, embracing European suggestions that the state must involve itself in content regulation online because of the failure of self-regulation, an ominous draft law in Poland from ruling right-wing Law and Justice Party would fine social media companies for taking down content that is not explicitly illegal. That, it is feared, could allow more targeting of LGBTQ people.

The challenge that society faces is how, beyond the relatively uncontroversial enforcement of laws against illegal speech online (from incitement to hatred and violence, to terrorism content, to the posting of child pornography) to define the unacceptable. Where do we draw the line? Is the takedown of material by Facebook tantamount to censorship, or is it the exercise of its democratic right to decide who it hosts on its platform?

Or does its gigantic size and monopolistic position in the market require us in the name of democracy to change the rules and find some regulatory place between self-regulation and state control?