The Irish Times view on the North talks: A grave responsibility 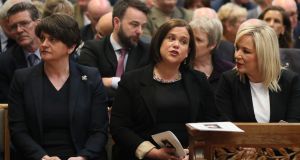 There is a grave responsibility on the two big parties in Northern Ireland to find a way to make politics work again following the murder of Lyra McKee. They will have a chance over the next three weeks to demonstrate if they are really serious about representing the people of the region or if they are simply focused on an endless round of tribal point scoring.

The institutions at Stormont have been in abeyance now for more than two years at a time when critical decisions which will have an enormous impact on the future of the North are being made. Brexit is the obvious one, but there are a range of other issues affecting the everyday lives of the people which are being made by civil servants, or simply not being made at all, because the elected representatives cannot find a way of working together.

Taoiseach Leo Varadkar has urged the Democratic Unionist Party (DUP) and Sinn Féin to be generous and make the concessions that are required to ensure that the power-sharing institutions at Stormont can be restored. He referred to his own experience in negotiating coalition governments in the Republic and emphasised that there has to be give and take on both sides.

There is an onus on both parties to make difficult compromises that might not go down very well with their own voters but the results of the local elections in the North indicates that the support base of both big parties is reasonably solid. That should give them the confidence to make concessions that might annoy some of their supporters.

The parties were on the verge of agreement just over a year ago but the rug was pulled from under DUP leader Arlene Foster at the last moment by some of her hardline supporters. She will need to find the political courage to sell any deal agreed this time round.

The same applies to the Sinn Féin leadership who must do more than reiterate the elements of the draft deal that failed the last time. Comments by Mary Lou McDonald in advance of the talks appearing to lay down preconditions on issues like abortion, gay rights and the Irish language did not augur well for the process.

The impression given by the Sinn Féin leader was that she was preparing the ground for failure. Her attempt to pressure on the British government about what it might do if the talks do not succeed was hardly designed to create the kind of atmosphere needed for there to be any chance of compromise.

The smaller political parties in the North taking part in the talks also have an opportunity to make their voices heard on contentious issues. There is an opportunity for them to come together and seize the initiative if the big parties refuse to take the process seriously.