The Irish Times view on Venezuela in crisis: Democracy is the escape route 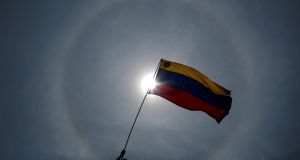 An opposition supporter holds a Venezuelan flag during a rally against the government of Venezuela’s President Nicolas Maduro and to commemorate May Day in Caracas. Photograph: Ueslei Marcelino/Reuters

The events of recent days in Venezuela speak to the depths that the long-standing crisis there has reached. Its citizens are caught between an increasingly brutal dictatorship that seems willing to destroy their society in order to hang onto power and an opposition at a loss about how to remove it. This deadlock only serves to worsen a humanitarian crisis that is reaching catastrophic proportions.

The United Nations estimates that in the country with the world’s largest oil reserves seven million people, that is one in four of the population, are in need of humanitarian assistance. Of these 3.7 million suffer from undernourishment, including 1.3 million children under the age of five. The crisis has already caused another 3.7 million Venezuelans to flee abroad with thousands more pouring across the frontiers into Colombia and Brazil each day.

Overwhelming responsibility for this disaster lies with the chavista regime of President Nicolás Maduro. During two decades in power the Bolivarian Revolution launched by his predecessor Hugo Chávez in 1999 has, thanks to a toxic mix of reckless populism, poorly conceived socialism and gangsterism, ruined what was once South America’s richest country.

In 2015 Venezuelans handed chavismo a crushing defeat in parliamentary elections, a result that was viewed as a prelude to Mr Maduro’s removal in the next presidential poll. The regime responded by snuffing out the last vestiges of the democracy that had provided it with electoral legitimacy in earlier times.

Since then, it has ratcheted up repression at home, killing hundreds of protesters who took to the streets, even while feigning participation in dialogue with its domestic opponents. Its duplicity was such that earlier this year Pope Francis rejected a request from Mr Maduro to mediate a new round of talks because of his bad faith the last time the Vatican did so.

It is therefore wrong to characterise the recent effort by the opposition to remove Mr Maduro as a coup. Those abroad who do so only give succour to an indefensible regime that works to delegitimise its opponents by portraying them as lackeys of Washington. The legitimate demands of the Venezuelan people for an end to dictatorship are not invalidated just because they have been backed by the Trump administration which has bullied and blundered its way through the crisis. Instead of such ideological point-picking what the Venezuelan people need now is a concerted international effort to force the regime in Caracas into agreeing robust transitional arrangements towards free and fair elections. The International Contact Group on Venezuela provides the best hope of achieving this. In the absence of a better alternative this is where diplomatic efforts to resolve the crisis should now focus.