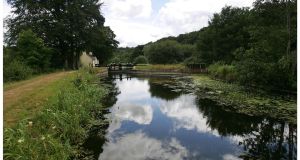 In the quagmire of Brexit there is little to commend the UK government’s approach. This is in stark contrast with its clarity and leadership on climate change. It is the first national parliament to declare an “environmental and climate emergency”. It has not only committed to “net-zero” greenhouse gas emissions by 2050, the climate change committee in Westminster has set out how this can be achieved.

Net zero means, in effect, eliminating its carbon footprint in a dramatically transformed economy built on sustainability with a near absence of fossil fuels. Ireland has some way to go before it could commit to such a course, but a Government report due in the coming weeks must show a similar level of intent, and include a roadmap to reduce the shocking levels of Irish emissions.

Declaring an emergency may seem like tokenism but it injects urgency into consideration of the best course to take. Wicklow County Council was the first Irish local authority to declare a “biodiversity and climate change emergency”. The Government should endorse a similar vote in our national parliament and introduce binding legislation on revised targets.

It should be mindful of the dangerous consequences of a warming world. NUI Galway scientists last week showed microplastics are polluting oceans and impairing the ability of jellyfish-like animals called zooplankton to trap large volumes of carbon dioxide. It coincided with confirmation climate change is contributing to the unprecedented decline of wild salmon in Irish rivers. For every 100 smolts leaving freshwater “just three or four” return. Such a decline suggests a risk of extinction in the Irish context. Climate change is disrupting nature, when in fact, it could be part of the solution. Some 77 per cent of potential EU voters identify global warming as an important factor in deciding who to vote for in European elections, according to an Ipsos MORI poll. Anecdotally, the issue is coming up on Irish doorsteps like never before. The mandate for politicians to declare a climate emergency and ramp up ambition could not be stronger.