The Irish Times view on the Mueller report: open questions

The special counsel may have done Democrats a favour 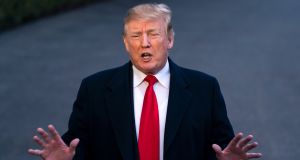 Until the Mueller report can be assessed in its entirety, the questions over Russian interference in the 2016 election and the role of Donald Trump and his entourage remain open. Photograph: Jim Lo Scalzo/EPA

On the face of it, the four-page letter to Congress from US attorney general William Barr, in which he summarises the findings of special counsel Robert Mueller’s investigation into Russia’s interference in the 2016 presidential election, should come as a relief to all Americans. After an exhaustive two-year inquiry, Mueller concluded, according to Barr, that there no was evidence that Donald Trump or any member of his inner circle conspired with the Russian government to affect the 2016 election. That’s good news.

The problem is that Barr’s short summary obscures as much as it reveals. Mueller’s brief covered two broad questions: whether there was a conspiracy with Russia, and whether Trump tried to obstruct justice. On the first, the special counsel appears to have come to a definitive conclusion. But we don’t yet know Mueller’s rationale for that conclusion. What we do know is that the Russian government interfered repeatedly and, from its point of view, successfully, in the election. Senior figures in the Trump campaign knew about this but did not report it; in fact they encouraged it.

On the second question, Mueller’s findings are much more ambiguous. “While this report does not conclude that the President committed a crime, it also does not exonerate him,” said Mueller in a portion of his report quoted by the attorney general. Barr took just 48 hours to decide that there was insufficient evidence to bring charges against Trump. But, again, we don’t know what evidence Mueller was relying on. And the fact that Mueller could not prove conspiracy does not mean it did not exist. It bears repeating: the Mueller report remains unpublished. All we have are the conclusions of a politically appointed attorney general. Until the document itself can be assessed in its entirety, the questions over Russian interference remain open.

Many Democrats had invested such hope in Mueller as the saviour who would topple Trump that their reaction to Barr’s conclusions reeked of disappointment. That’s understandable, but perhaps Mueller has done them a favour. His report will no doubt reveal more unsavoury details about Trump and his campaign. A finding of criminal behaviour risked plunging the US into total political paralysis, with the Democrats going all-out for an impeachment that Republicans would not allow to occur – in the process feeding Trump’s victim complex and exciting his base in time for the 2020 election.

It’s important that Trump does not have a second term. But it would be infinitely better to have him rejected by the people at the ballot box. The conclusion of Mueller’s investigation will force Democrats to focus on the task at hand: how to convince enough Americans that their president is unfit for office and must be replaced.