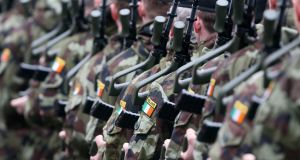 Members of 59th Infantry Group pictured at the Curragh Camp last week as Minister for Defence Paul Kehoe, accompanied by Chief of Staff of the Defence Forces, Vice Admiral Mark Mellett, reviewed the men and women of the 59th Infantry Group ahead of their six month deployment to Syria as part of United Nations Disengagement Observer Force (UNDOF). Photograph: Colin Keegan/ Collins Dublin

Ireland’s Defence Forces are held in high regard by the people they serve. Whether it be assisting the Garda in protecting State institutions, patrolling the seas, or, perhaps most notably, making peacekeeping and humanitarian interventions abroad, the Defence Forces give Irish people a sense of pride in the country.

The Army, the Naval Service and the Air Corps, and the relationship between the Defence Forces and the State, are all products of Ireland’s history. But, as the current chief of staff, Vice-Admiral Mark Mellett, noted in this newspaper yesterday, the world does not stand still and the threats posed to Irish and European security are metastasising with alarming speed. Dealing with new realities requires lateral thinking, or as Vice-Admiral Mellett put it, breaking down silos in favour of strategic alliances and co-operation within and between State institutions, and between those institutions and external bodies.

Relations between Vice-Admiral Mellett and Garda Commissioner Drew Harris appear to be very good. They must be. Recent anti-terrorist training exercises in which specialist Garda and military assets have worked together augur well. The Government decision to set up a Strategic Threat Analysis Centre (Stac), bringing together data and analytical expertise from a range of sources, is also a step in the right direction. Ireland joining Pesco, the EU’s defence co-operation facility, will facilitate pan-EU collaboration.

The transnational nature of defence challenges thrown up by cyberthreats and hybrid warfare-style interference in national sovereignty can only increase this dynamic towards greater co-operation. Ireland should not shy away from it. Rather, it should be debated openly and, where national and European self interest indicates, and where it is consistent with the State’s military neutrality, it should be embraced. But before that, as Vice -Admiral Mellett states, the number one issue for the Defence Forces is the bread and butter concern of remuneration. The Public Sector Pay Commission view is awaited eagerly. So too will be the Government’s response.

1 Coronavirus: People in close contact with Belfast patient identified
2 Status red wind warning issued for Galway and Clare as Storm Jorge approaches
3 Murder in a crowded house: The full story of the Patricia O’Connor trial
4 Joshua Allen jailed for 15 months for drugs offences
5 Britain is uncomfortable because Ireland has the upper hand for the first time
Real news has value SUBSCRIBE