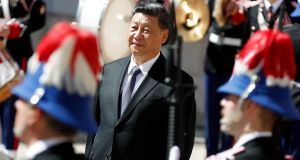 Chinese president Xi Jinping during a welcome ceremony prior to a meeting with Prince Albert II of Monaco in Monte Carlo, Monaco, on Sunday. This is the first official visit of Chinese president to Monaco. Photograph: Sebastien Nogier/EPA

‘China is, simultaneously... a co-operation partner with whom the EU has closely aligned objectives, a negotiating partner with whom the EU needs to find a balance of interests, an economic competitor in the pursuit of technological leadership, and a systemic rival promoting alternative models of governance.” This nuanced account of EU-China relations comes from a recent European Commission review of the subject. It was intended to inform a strategic discussion at last week’s European Council summit, which got diverted by its Brexit decisions. The China issue is nevertheless a huge one with vital long-term significance.

President Xi Jinping of China signed off on a number of agreements with Italy over the weekend and will this week meet president Emmanuel Macron of France along with the German leader Angela Merkel and European Commission president Jean-Claude Juncker. Their discussions will influence the EU-China summit on April 9th. China’s emergence to superpower status under Xi poses hard choices for the EU which were obscured and postponed as individual member states pursued commercial advantages over the years of its phenomenal economic growth since the 1990s.

Now China’s huge Belt and Road Initiative to connect Europe and Asia over land and sea involves 60 countries in what has become the greatest infrastructure investment plan in the world. Italy is the 13th EU member to be associated with it but is the first member of the Group of 7 industrialised states to do so. The other EU members include Bulgaria, Greece, Croatia, Hungary, Poland, Portugal, Slovakia and Slovenia. Germany, France and several northern EU states are much more suspicious of the Chinese initiative as a potential debt trap. They complain terms and condition of trade and investment with China are unfair and non-reciprocal, that European scientific and intellectual property is being stolen and that their cybersecurity is threatened by Chinese advances on 5G technology.

These differing responses to China’s challenge from within the EU expose considerable disarray and underline how important it is to conduct the strategic review called for by the European Commission. Shared commitments to defending multilateralism between the EU and China against president Donald Trump’s assertion of US interests have to be balanced against systemic rivalry and alternative models of governance.

China’s ability to gather support from southern and eastern EU states reveals their dissatisfaction with existing sources of European infrastructure and development investment and their alternative assessments of the risks involved. If it is true that the period of EU naivety about China has passed, as Macron puts it, hard choices now face all its members on how to forge a common policy towards China.