The Irish Times view on the French election: a green surge

Municipal elections can be a poor guide to national performance 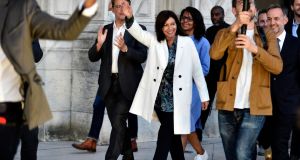 The incumbent mayor of Paris, Anne Hidalgo, arrives to deliver a speech after winning the second round of the French municipal elections on Sunday. Photograph: Julien de Rosa/EPA

The Greens were the clear winners in the second round of France’s municipal elections on Sunday, but theirs is an ambiguous victory. The environmental alliance Europe Écologie Les Verts (EELV) wrested control of Bordeaux city hall from the centre-right, which has held the city since the second World War, and won resounding victories in Lyon, Strasbourg and Besancon.

Even where EELV itself did not prevail, its ideas often did. In Paris, where the socialist mayor Anne Hidalgo held on for a second term in office, it was thanks to support from the Greens and a policy platform dominated by climate action, cycling and sustainability.

Macron v Le Pen is the dominant duel in national politics, and their rivalry will shape the 2022 election

The two blocs that dominated French politics for most of the past half-century, the Socialists and the centre-right party now known as Les Républicains, had mixed results. The socialists’ ex-leader Martine Aubry narrowly won re-election as mayor of Lille, and the party retained control in Paris, Nantes, Rennes, Rouen and a number of other strongholds. After the rout the party suffered in the 2014 local elections, that felt like consolidation.

Similarly, Les Républicains, despite losing power in Marseille and Bordeaux, continues to run half of all towns with more than 9,000 inhabitants. Yet both the socialists and Les Républicains must know that local elections in France can often be a poor guide to national performance.

What has emerged then is two political tracks. Macron v Le Pen is the dominant duel in national politics, and their rivalry will shape the 2022 election. But at local level, it is the three parties with the deepest regional roots and networks – the socialists, the Greens and the centre-right – who remain in control.

4 Beyond the guidelines: How not to get Covid-19 this weekend