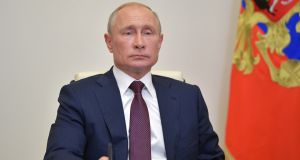 If Vladimir Putin remains in the Kremlin through to 2036 he will far surpass Stalin’s tenure as leader of the Soviet Union and become the longest-serving Russian leader since Peter the Great. Photograph: Getty

Referendums are imperfect instruments for assessing the popular will in democracies and in the hands of autocrats and dictators, are often more to do with legitimising demagogic, populist rule than sounding out democratic intent. Not least, as we know too well, because voters are often inclined to ignore the question being asked and cast ballots for the “great man” who asked it.

Russia’s president Vladimir Putin last week saw 77.9 per cent of voters endorse constitutional amendments in an advisory referendum (like the UK Brexit vote) on a turnout of nearly 68 per cent. The poll backed changes which lift term limits on his 20-year rule allowing him potentially to continue running the country until 2036, but was legally unnecessary as the Duma had already approved the changes. But even autocrats like the veneer of “democratic” approval.

They voted for many reasons. But ending his term limits barely got a mention during the campaign. The package included pension and minimum wage increases, a modest reorganisation of government, a mention of “faith in God”, a ban on gay marriage, exhortations to preserve the Russian language, protection of the “historical truth” of the second Word War and banning “belittling” of the feats of those who fought – Joseph Stalin included? Oh, and promoting a “responsible attitude” to animals.

The conduct of the poll has been attacked by election monitors and opposition politicians for its naked partisanship and concerns, among others, that local authorities enticed voters with raffles and cash prizes to increase the turnout. Critics complained that online voting was impossible to monitor. Unofficial opposition exit polls showed voters in Moscow narrowly rejecting the changes and soundly defeating them in St Petersburg, Russia’s two largest cities and bastions of anti-Putin sentiment.

If Putin remains in the Kremlin through to 2036 – he has yet to confirm that he intends to stand again, although he is unwilling to explain the necessity for the personal constitutional provision – he will far surpass Stalin’s tenure as leader of the Soviet Union and become the longest-serving Russian leader since Peter the Great. He ruled for 43 years until his death in 1725.

Despite his success last week Putin’s popularity is on the wane – polls ahead of the referendum show once-stratospheric approval ratings down to about 60 per cent, the lowest since 2013. The management of the economy – living standards are stagnating – and the pandemic has not helped. The IMF expects GDP to drop by 6.6 per cent in 2020. And although the government lifted most lockdown controls on June 24th, confirmed cases now top 650,000, making Russia the hardest-hit country in the world after the US and Brazil.