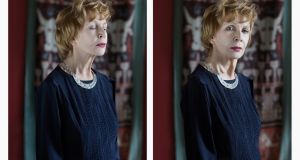 Edna O’Brien’s portrait, by photographer Mandy O’Neill, was unveiled at National Gallery of Ireland to mark the writer’s 90th birthday

‘To read Edna O’Brien is to know love: of words, of literature and of life itself,” wrote Eimear McBride in one of many tributes by fellow writers, which The Irish Times published on Tuesday to mark the Clare-born author’s 90th birthday. That same day, her portrait by Mandy O’Neill was unveiled at the National Gallery of Ireland. And that evening, O’Brien delivered the annual TS Eliot lecture, via the Abbey Theatre’s website, enabling a wide audience to marvel at the intellectual acuity, undimmed by age, of this grande dame of Irish letters.

It was, of course, not always thus. Now revered in Ireland and internationally, O’Brien was oncedenounced from the pulpit and banned by the censor for the audacity of her truth-telling. Now eminent, the author, like so many, became an emigrant rather than be stifled in an Ireland which treated women as second-class citizens.

Most authors embarking on their tenth decade must reconcile themselves to the waning of their creative powers. O’Brien not only perseveres but still breaks new ground

Most books first published in 1960 are out of print but O’Brien’s debut, The Country Girls, is still widely read – entrancing and influencing a new generation of writers and readers with what writer Elaine Feeney called “that revolutionary act of a woman writing complex women”. The Country Girls trilogy was Dublin’s 2019 One City One Book, embraced by the capital of a country transformed, now in tune with what had once been perceived as a discordant voice.

The elegant exactitude of her prose has been rightly celebrated. In the words of Eilís Ní Dhuibhne, “the boundary between poetry and prose melts away in her fiction”. Like Brian Moore, another exile, her oeuvre has expanded from intimate Irish stories to ambitious international subjects. The Little Red Chairs (2015) drew on Bosnian Serb leader Radovan Karadzic’s war crimes. Girl, last year’s Kerry Group Novel of the Year, was based on the Boko Haram kidnapping of Nigerian schoolgirls.

Most authors embarking on their tenth decade, many long before, must reconcile themselves to the waning of their creative powers. O’Brien not only perseveres but still breaks new ground.