The demise of a populist coalition will please many, but no guarantee replacement will be better 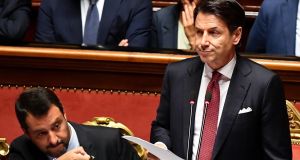 With the resignation of Italian prime minister Giuseppe Conte, Italy has moved closer to another general election at a time when it badly needs political stability. In a remarkable scene in parliament on Tuesday, Conte delivered a stinging critique of deputy prime minister Matteo Salvini, whom he accused of collapsing the ruling coalition to cash in on his rising popularity. “His decisions pose serious risks for this country,” Conte said of Salvini, who sat at his side, rolling his eyes.

Conte is no doubt correct about Salvini’s motivation. When the far-right Lega and the “anti-system” Five Star Movement formed a government 14 months ago, Salvini’s Lega was, with 17 per cent of the popular vote, the junior partner to Five Star, which had 33 per cent.

Yet an election will not necessarily produce the stability that Italy, one of the world’s most indebted countries, needs as it enters budget season

In government, however, the two parties’ fortunes have diverged. Today, opinion polls put support for the Lega at 36 per cent – far ahead of Five Star at 18 per cent. Salvini has said it is time to take “full powers” and has spent the summer campaigning vigorously on Italy’s beaches and on the airwaves.

It has certainly been an uneasy cohabitation between two parties whose anti-immigrant rhetoric and hostility to the EU mask fundamental differences over tax policy, infrastructure spending, welfare and the environment – issues that have caused constant tension in the administration led by the technocratic Conte. The demise of their government will naturally be welcomed by many.

Yet there is no guarantee that the alternative will be any better. Italian president Sergio Mattarella began talks with party leaders on Wednesday to see if a new coalition could be formed. One possibility is an arrangement between Five Star and the centre-left Democratic Party, but their mutual enmity and policy differences could make for an incoherent, fractious administration.

In the long run, Salvini would be the winner. Yet an election – which, on current polls, would likely produce a Lega-led government – will not necessarily produce the stability that Italy, one of the world’s most indebted countries, needs as it enters budget season.