Paradoxically, the best hope is that the next British PM will be guided by three of his worst traits 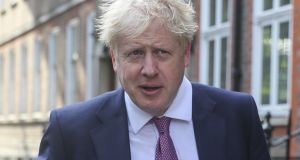 How far can Britain fall? The Brexit debacle has already left the country bitterly divided, its parliament paralysed, its influence diminished and its reputation shattered.

And now, a new nadir: Boris Johnson is set to become prime minister. That means things could still get a lot worse.

Johnson is a profoundly unserious man wildly unsuited to high office. That’s to put it generously. In normal times, his ineptitude – on full display during his time as foreign secretary – would hold his country back. In these times of crisis, his character flaws could prove catastrophic.

Yet, paradoxically, the best hope for Ireland and for Europe – not to mention for British citizens themselves – is that Johnson as prime minister will be guided by three of his worst traits, which together have defined his career: he doesn’t mean a word he says, he is obsessed with power and he is willing to betray those closest to him in the pursuit of that power.

In other words, the best-case scenario is that Johnson is every bit as limited as his record suggests.

Why? Because at some point over the coming weeks, Johnson will almost certainly have to do one of two things: push his country over the cliff of a no-deal Brexit – which will guarantee social unrest, probably end his premiership and imperil his party’s electoral future – or reverse his position and sign up to the exit deal, perhaps with some cosmetic tweaks.

Johnson himself plainly has no idea how to reconcile the need to avoid a hard border with an exit from the customs union. He maintains blithely that technology will somehow fix everything, but if he really believed that then he would have no issue with the backstop because it would be irrelevant.

Even if Johnson is bluffing, that does not mean a no-deal crash-out won’t happen

In these circumstances, the Irish Government and the EU have every reason to hold the line on the backstop. Dublin has worked hard for three years to secure a fixed EU position on the border.

Now, in an inversion of the historic relationship between the two neighbours, it is Ireland, thanks to its position within a united EU, that has the greater power.

For three years, the EU has negotiated with a shambolic, incoherent negotiating partner guided by no discernible strategy. Now, the British government’s last gambit is a threat to set itself on fire.

Given that Johnson has no parliamentary majority for a no-deal; that he already voted once for the withdrawal deal; and that a no-deal would pose a mortal danger to himself and his party; it’s hard to take the threat seriously.

Unfortunately, even if Johnson is bluffing, that in itself does not mean a no-deal crash-out won’t happen. He could lose control of events. He could run out of time. At a certain point, the brinkmanship could become a self-fulfilling prophecy. And then the real horror-show would begin.

1 WHO warns of potential for ‘immediate second peak’ in Covid-19
2 Coronavirus: No new Covid-19 deaths reported in State for first time since March
3 Archaeologists are ‘quite sure’ they have found Red Hugh O’Donnell’s burial place
4 André Leon Talley: How Anna Wintour threw her right-hand man ‘under the bus’
5 HSBC board rethinks overhaul and seeks even deeper cuts
Real news has value SUBSCRIBE