Amnesty says there are criminal investigations into the deaths, and those responsible must be brought to justice 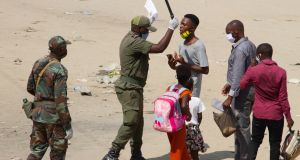 A police officer gestures while talking to youths in the Kifangondo district of Luanda, Angola. Photograph: Getty Images

A 14-year-old is among at least seven young men and boys who have been killed by Angolan security forces implementing coronavirus restrictions, according to an investigation by Amnesty International and Angolan human rights organisation Omunga.

After interviewing friends and relatives of the victims, the organisations said seven deaths was likely an underestimate given that “Angolan security forces have repeatedly used excessive and unlawful force when dealing with breaches of state of emergency regulations imposed to control the spread of Covid-19”.

One teenage boy was shot in the face while he lay injured; another was killed when police fired on a group of friends practising at a sports field

All the killings took place in poorer neighbourhoods between May and July, they said, and are thought to have involved officers from the Angolan National Police (Polícia Nacional de Angola – PNA) and Angolan Armed Forces (Forças Armadas Angolanas – FAA).

“The stories we heard from relatives and eyewitnesses are harrowing. One teenage boy was shot in the face while he lay injured; another was killed when police fired on a group of friends practising at a sports field. A state of emergency is no excuse for such outrageous human rights violations,” said Deprose Muchena, Amnesty International’s director for east and southern Africa.

Among the dead was Mário Palma Romeu, a 14-year-old who was buying sugar for his mother in Benguela province on May 13th when he was was hit by a bullet after police fired into the air to disperse another group of young men.

The following month, on June 5th, Altino Holandês Afonso (15) was allegedly chased by an officer close to his aunt’s home, and shot in the stomach.

On June 17th, João de Assunção (20) was reportedly stopped for not having a mask, before officers pointed guns at him and ordered him to perform a somersault. According to witnesses, police then shot into the air beside him, causing Assunção to collapse. He had underlying medical conditions and died later in hospital.

Mabiala Rogério Ferreira Mienandi was allegedly shot on the morning of July 3rd, while hanging out in a sports field with friends after police opened fire indiscriminately.

The following day Clinton Dongala Carlos (16) was allegedly shot in the back by police while returning from dinner at his aunt’s house in Luanda province, and then shot in the face as he lay on the ground.

A taxi driver, José Quiocama Manuel, was shot after trying to hide from police on July 13th.

Amnesty said there were now criminal investigations into seven deaths, and called for compensation for families, and that those responsible to be brought to justice.

The Irish Times sought a response to the allegations from the Ugandan police and this was awaited.

Angola, an oil-rich country of roughly 31 million on Africa’s southwest coast, has 2,171 confirmed coronavirus cases and 96 deaths so far.

The country is also grappling with a major corruption scandal. This month José Filomeno dos Santos, the son of Angola’s former president, was jailed for five years for his involvement in the transfer of $500 million (€422m) from Angola’s national bank to a UK account. The transfer was carried out in 2017, weeks before his father, José Eduardo dos Santos, resigned his position after 38 years in power.