Moderate approach may be slowly taking hold at factory gates 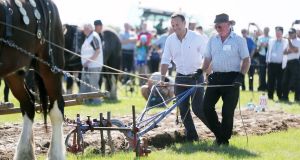 Taoiseach Leo Varadkar tries his hand at ploughing with Colman Cogan and his two horses Ned and Ted from Sligo during the National Ploughing Championships in Carlow last week. Photograph: Niall Carson/PA Wire

Wellies and raincoats have always been treated as necessary attire when visiting the National Ploughing Championships in September. But not this year. Not in sunny Fenagh, Co Carlow, where skies were blue, the ground was firm and temperatures crept into the 20s. What a change from last year when Storm Ali brought wind gusts of up to 120km/h, thrashed display stands and forced a one-day cancellation.

“The ploughing” is a national institution, attracting people from all walks of life, from machinery salesmen to high-tech entrepreneurs, young women and men out for a good time, farming families, bachelors and interested townies. The 1,700 exhibition stands and tents reflect a plethora of interests, from food stalls to dancing platforms, craft fairs and tents for political parties and voluntary agencies. The local bishops staged a competition to identify Ireland’s favourite prayer. The three-day affair, the largest outdoor event of its kind in Europe, set a new attendance record, just shy of 300,000 visitors.

Farming is a cyclical business and its practitioners are a resilient lot. They have to be to cope with the challenges that nature and a volatile industry throws at them. Heavy snow and the “beast from the east” in 2018 gave way to an extremely dry summer with poor grass growth. Farmers had to buy in expensive feed. Average family farm incomes fell by 21 per cent. That decline has continued this year. Many farmers, particularly those in beef and sheep, are hurting. But improved grass growth and fewer inputs have supported the dairy sector.

Uncertainty over the processing of cattle, because of protests and picketing at meat plants, put a damper on what should have been a celebration by relaxing farmers of the turning year. Loss of unity, when six – rather than two – bodies engaged in negotiations with processors, was seen as a retrograde step. Many believed the beef deal on offer, while limited, should be accepted. That moderate approach may be slowly taking hold at factory gates.