The Irish Times view on Ireland’s current Covid-19 restrictions: After the lockdown

Yes, we can ‘save Christmas’ – but only at the cost of spring 2021 and a lot more businesses 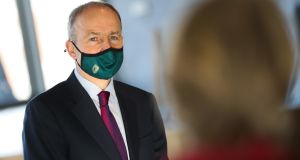 One could hardly blame hard-working National Public Health Emergency Team officials for giving prominence to international comparisons in recent days. These show Ireland has one of the lowest incidences of Covid-19 in Europe and is one of only two countries on the continent where incidence is falling. The context is one of rapid deterioration in case numbers and, in many countries, in hospitalisations and ICU patients. England and much of Italy this week followed France into lockdown, while Germany and Russia have recorded new daily records for positive cases.

Ireland looks set to escape the worst of the second virus surge thanks to the early imposition of restrictions. What is less clear is which set of restrictions we have to thank for our improving figures. Was it the move to Level 3 in early October, or to Level 5 later in the month? Did the ban on house visits, or better enforcement powers for gardaí, help?

We know that the elements of a successful strategy include rapid and plentiful testing, well-resourced contact tracing, controls on movement and effective quarantining

Nphet deserves kudos for its clear and consistent messaging in this crisis and its informed understanding of the threat posed by the virus. It is on shakier ground when it asserts that Level 5 has already made the difference in pushing back Covid-19. Due to the time lag, the effects of this change will first be seen over the coming week, but officials have claimed “anticipatory behaviour” by the public in advance of Level 5 measures means the impact has already kicked in.

Perhaps. Yet none of this matters half as much as what we do after the current “lockdown-lite” to avoid a third surge. Yes, we can “save Christmas” – but only at the cost of spring 2021 and a lot more businesses that fail and people who lose their jobs and their morale.

First, we need to get case numbers down to double-digits each day. Then, to avoid another surge, we have to find an effective way of hunting down the remaining cases and tracking their contacts rapidly. Few countries have mastered this task but we know now that the elements of a successful strategy include rapid and plentiful testing, well-resourced contact tracing, controls on movement and effective quarantining arrangements.