The Irish Times view on political leadership: why politicians matter

Recognition of forces that change history is not to deny the role of good leaders, or bad ones 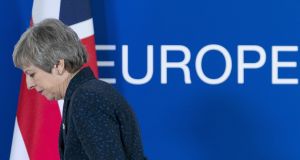 Theresa May’s limitations have been cruelly exposed at almost every turn of the Brexit process. Photograph: Jasper Juinen/Bloomberg

‘The history of the world is but the biography of great men,” wrote Thomas Carlyle. But the discrediting of the Great Man theory of history – the reductive 19th century idea that historical change can be explained largely by the influence of heroic (and male) individuals possessed of supreme attributes – in time gave way to a richer appreciation of the past – one that reflected the role of class, gender, culture and the influence of ordinary people.

But recognising the multiplicity of forces that change the world is not to deny the role of good leaders – and, just as important, bad ones. This week was a case in point. When the history of the Brexit fiasco is written, it may rightly emphasise the structural forces behind it. But those of us living through it can see that the debacle has been made far worse by mediocre politicians.

It began with David Cameron’s terrible miscalculation. Theresa May’s limitations have been exposed at every turn. Her failings would matter less if there was a serious opposition, but Brexit coincided with the rise of Jeremy Corbyn, a radically inadquate figurehead. The balance of power in Westminster has been held by the DUP led by Arlene Foster, whose leadership skills have yet to become apparent. To cap it all, the UK claims as its most reliable ally a country led by Donald Trump.

It may be of little comfort to the UK, but its abasement has reassured others on the benefits of good leadership. In New Zealand, Jacinda Ardern’s calm yet purposeful response to the Christchurch massacres showed why a competent prime minister matters at big moments. Indeed, the response of EU leaders to Brexit – marked by unity, consistency and imagination – has been everything that London has lacked.

The message is simple: at a time when the nation state’s primacy is challenged by the power of corporations, when technology is eroding borders, when politicians are routinely maligned and when voter turnout in mature democracies is in decline, individual political leaders – good ones and bad – can still profoundly shape the course of events.

1 Operator rejects claims by Dr Tony Holohan that car parks are full
2 Irish designer of Oxford vaccine: ‘I’ve never worked so hard in my life’
3 BOI customers to be charged twice with bank fees on New Year’s Eve
4 Somebody needs to explain sovereignty to Johnson before it is too late
5 Ministers to push for ‘greatest possible’ easing of Covid restrictions
Real news has value SUBSCRIBE