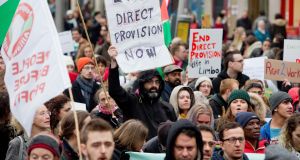 A demonstration in Dublin calling for anend to the direct provision system. Photograph: Tom Honan

In 1999, the then minister of state Liz O’Donnell caused a political storm when she described her own government’s asylum policy as “a shambles”. Direct provision – a system under which asylum seekers were provided with basic housing, meals and a small allowance but banned from taking up paid work – was the official response to the pressures that Fianna Fáil-led coalition faced on the issue.

Twenty years on, criticism of the State’s asylum policy is if anything even more intense than it was in 1999. Direct provision rested on an assumption that was wrong from the beginning: that asylum seekers would have their claims processed in a timely and fair manner and would only have to live in this punitive limbo-status for about six months. As the years passed, and as the numbers of applicants rose, the context changed dramatically, but the system remained the same. A byzantine, drawn-out process left people in remote hostels with no means of integrating into their community for years on end. Decisions were inconsistent. The appeals process was worse. The only people who did well out of the system were the owners of a lucrative accommodation business.

1 Could Ireland put towns under lockdown if coronavirus arrived?
2 IRFU seek meeting over call to postpone Ireland-Italy match
3 Dublin man may have been stabbed to death by woman in parking space row
4 Irish in Italy on coronavirus: ‘The city is in a bit of panic – the streets are empty’
5 Fintan O’Toole: If murderous dissidents are wrong, so was Provisional IRA
6 A cardiac problem that could strike at any time
7 Why Sinn Féin will not call the State by its name
8 Gerry Thornley: Wild reactions to this Ireland team as fickle as the wind
9 Masks and hand gel sell out as coronavirus fears take hold
10 Bank leaked my loan request to family who tried to rip me off
11 Left-right split will not benefit ‘ordinary people’ – McDonald
12 Father-of-three found guilty of murdering Patricia O’Connor
13 Coronavirus: Irish holding back on holiday plans
14 Murder accused ‘lay down’ with wife for 10 minutes after killing her
15 Claim that IRA controls Sinn Féin ‘based on hearsay’, says Ó Cuív
16 Costa living: ‘Move home to Ireland? I’d hate it’
17 What did it mean to be an Irish teenage girl in the early 1990s?
18 Irish in Tenerife contact department over coronavirus concerns
19 Brexit: UK-EU tensions mount ahead of divorce talks
20 ‘It affects your nervous system, your brain, your thought process’
21 Coronavirus: ‘I’ve planned a holiday to northern Italy. Should I cancel?’
22 Trump says he never liked Harvey Weinstein but ‘Michelle Obama loved him’
23 IRFU not consulted prior to Minister Harris’ recommendation to cancel Ireland v Italy
24 It may be too late to stop Bernie Sanders winning democratic nomination
25 HPV vaccine: A complete guide to immunising daughters and sons
26 Garda warning after €500,000 of ‘movie money’ found in circulation
27 Chris Patten ‘amazed’ UK sees common rules with EU as ‘impossible’
28 Post-Brexit talks may derail over Johnson’s stance
29 Kathy Sheridan: The trial of Harvey Weinstein is far from over
30 Coronavirus: Irish citizens advised not to travel to Italy’s affected areas
31 Coronavirus deepens Iran’s isolation as global infections rise
32 How do I get my child to read books with more words and fewer pictures?
33 Cheltenham keeping a watching brief on coronavirus
34 Combining aerobics and weights key to avoiding obesity
35 Coronavirus: NI pupils on Italy ski trips sent home from school
36 Dan Tuohy explains ‘rotten to the core’ comments
37 Spread of coronavirus triggers European travel curbs
38 First Irish rubella case for over a decade confirmed in Cork
39 Doctor Who landed in 1950s rural Ireland last night. The fiddles never stopped
40 Investigation into Dublin housing charity launched
Real news has value SUBSCRIBE