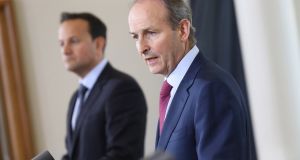 Instead of drawing a false sense of security from the decline in infections, the new Government led by Taoiseach Micheál Martin must use the current moment of relative calm to plan for the second phase of pandemic. Photograph: Julien Behal/PA Wire

Instead of drawing a false sense of security from the decline in Covid-19 infections, the new Government must use this moment of relative calm to plan for the second phase of pandemic. It must learn from what the the previous administration did right and wrong.

One of its mistakes was mixed messaging. At critical moments, the last government over-promised on testing and tracing capacity with little heed to what the Health Service Executive could actually deliver. The system developed in time, but one of the new Government’s priorities must be to ensure that it is ready to deal rapidly with any new spike in infections.

Despite a growing body of literature pointing to the value of face masks as a public health tool, the last government was slow to advise people to wear them. When it eventually did so in mid-May, more than 11 weeks after the first case of Covid-19 was confirmed, the recommendation was undermined by officials’ frequent expressions of doubt about face coverings’ effectiveness. Little wonder many did not heed their advice. The last government began to put that right by making masks mandatory on public transport. The new Cabinet should go a step further by following Spain, Scotland and other countries in making them mandatory in shops and other public indoor settings.

There are worrying echoes of the confusion over masks in the current debate over foreign travel. On one hand, the Government says it plans to make it easier for people to go on holiday. On the other, it reminds us that public health officials fear a resurgence in infections due to such travel. Clearly it cannot satisfy every constituency. So it must choose. On present evidence, given the alarming rates of infection across the world, it simply must err on the side of caution, because while the economic cost of a travel ban for the tourism industry will be heavy, it will be as nothing compared to the cost of a second wave of infections requiring another round of restrictions. If a ban on non-essential travel is the price to pay for keeping the domestic economy going and keeping the virus at bay, it’s a price worth paying.

The same mixed messaging has been a feature of the discussion around schools, where different agencies of State have seemed at cross-purposes. Last month the Department of Education warned that many students may be forced to attend school part-time from September, but did so without the benefit of health guidance. Such guidance only arrived on Wednesday, when the Health Protection Surveillance Centre produced its own interim view. Arms of State should not be producing different advice, and at different times. They should be working together.

A government that had a clear view of its priorities – and the full return of our children to school should be at or near the top of the list – would find it easier to speak with one voice.