Executive at odds over proposal for series of six-week lockdowns 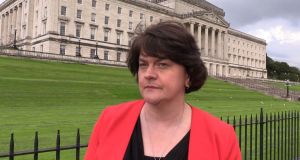 Northern Ireland recorded three more deaths and 877 new cases of Covid-19 on Monday as Stormont Executive Ministers consider whether six-week lockdowns should be introduced in the North to curb the dramatic rise of the virus.

The North’s Department of Health in its daily bulletin on Monday reported three deaths bringing the total to 591.

After almost 2,000 new cases over the weekend, the department recorded 877 new coronavirus cases on Monday, taking the total to 21,035.

In the past seven days 6,161 cases were reported. The Derry and Strabane council area, where additional restrictions are in place, is experiencing 971 virus cases per 100,000 of the population with Belfast reporting 455 cases per 100,000.

Some parts of Northern Ireland are seeing relatively low levels of incidence. In Mid and East Antrim the figure is 87 cases per 100,000 and in Ards and North Down 131 cases.

The number of people receiving hospital treatment for Covid-19 continues to rise. There are now 140 patients being treated, with 22 of them in intensive care units and 15 on ventilators.

The Executive is expected to meet on Tuesday with evidence of renewed tensions between Ministers on how to tackle the spiralling rise in Covid-19.

“That paper recommends decisive action be urgently taken to save lives, prevent the health service being overwhelmed and protect non-Covid services to the greatest extent possible,” said Mr Swann.

The Minister did not detail those proposals but a number of Stormont sources said they included recommendations that Northern Ireland enter an imminent six-week lockdown and that a further six-week lockdown may be required in the new year.

There was an expectation that the Executive would consider these proposals on Monday but sources said that instead the Executive will meet on Tuesday to try to chart a way forward.

Already, there appear to be renewed differences opening up on the issue between the two dominant parties in the Executive, the DUP and Sinn Féin.

Sinn Féin has not stated whether it would opt for a six-week lockdown. On Sunday however Sinn Féin MP Chris Hazzard suggested it was time to move away from localised measures, as pertains in the Derry and Strabane area.

“I think there was a logic and a sense behind local lockdowns at a time but I think we’re now moving fast into the area where we need to be looking at more general lockdowns once again, at more general and rigorous and robust methods at being able to suppress this virus,” he told the BBC.

The DUP leader and First Minister Ms Foster on Monday indicated that she was not in favour of a move as stringent as a six-week lockdown.

She said that “heavier restrictions however are not inevitable” if people observed the basic rules such as social distancing, wearing masks and having good respiratory hygiene.

She did not accept that the argument was simply “health versus wealth” because if businesses and jobs were lost and people ended up in poverty then that also would have health implications.

“So, we need a balanced approach,” she added. “Let no one say that these next few days will contain easy decisions but what they will contain for me is weighing up some very big choices as we seek to do what is right by all of our people.”

On Monday Ms Foster, Ms O’Neill and Mr Swann joined in a Cobra meeting with British prime minister Boris Johnson and representatives from the Scottish and Welsh devolved administrations on Covid-19.

After the meeting Ms O’Neill said she raised the need for additional finances from the British government. “Our Covid situation requires decisive action to stop the spread and therefore we need the finances to support workers, families and business in these challenging times,” she said.

The chief executive of Belfast Chamber of Trade Simon Hamilton warned a second lockdown would be severely damaging for many businesses. “Whilst we all appreciate that the situation with the virus has taken a turn for the worse and that action is required, the Executive must equally consider the wider and longer-term impacts on society, our mental health, jobs and the economy of the choices before them,” he said.