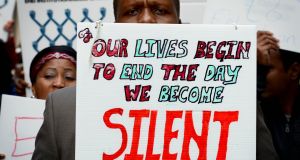 Ruban Hambakachere from Zambia during a protest march in Dublin in 2013 as part of a national day of action to end direct provision. File photograph: David Sleator

Just as an earthquake exposes flaws in a city’s design and structure, the Covid-19 pandemic has revealed weaknesses peculiar to each of the states where it has struck. England has paid the price for political mismanagement. In the United States, the crisis has shown the limits of the federal system in circumstances where the national leadership goes missing. Elsewhere, including in Ireland, the virus has highlighted that recourse to congregated settings to house some of a country’s most vulnerable people can be dangerously misconceived. That is true of direct provision, the system under which asylum seekers are housed while their applications are decided on. New clusters have been reported in a number of these centres in recent weeks, some of them linked to staff working at meat plants.

Until that can be put right, direct provision centres will continue to pose a high risk of infection to their residents and staff

The Government has rightly promised to end direct provision. But that is likely to take a considerable amount of time, not least as the Coalition has given no indication that it knows what the system will be replaced with. With the current system likely to remain in place for years, then, it’s imperative that steps be taken in the meantime to reduce the risk to residents from Covid-19.

A useful new report by the Refugee Council, which canvassed asylum seekers’ perspectives on the pandemic, points out that at least 1,600 people in direct provision are sharing bedrooms. Many more use communal kitchens and live in confined spaces. Until that can be put right, direct provision centres will continue to pose a high risk of infection to their residents and staff.

The HSE is reportedly finalising plans to test asylum seekers fortnightly. That would be a reassuring step. The State should also consider raising the meagre weekly allowance to take account of the cost of extra sanitary material and other costs associated with the pandemic. More broadly, it’s vital that the asylum application process remains fully operational.

Given that one of the chief flaws of the system is the unforgivably long time it takes for a case to be decided on, the creation of a new backlog would compound the problem.

1 How one couple’s weekend away resulted in 30 Covid-19 cases
2 Taoiseach tells TD to ‘cop on’ over criticism of contact tracers asking about pubs
3 The Comey Rule review: You actually begin to root for Trump
4 H is for hero: the origin story of Jack Reacher, a billion-dollar brand
5 Meghan Markle’s flight is nothing new: it’s history repeating itself
Real news has value SUBSCRIBE