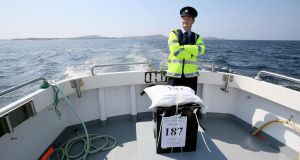 Garda Pat McElroy stands with the sealed ballot box as he travels back to the mainland from Gola Island, off the Donegal coast, after voting in the abortion referendum was completed on Thursday. The inhabitants of Gola island voted a day earlier than the rest of the country. Photograph: Paul Faith/AFP/Getty Images

The decision voters make today on whether to delete the Eighth Amendment to the Constitution will have profound consequences for Irish society for years and possibly decades to come. That is why it is so important that as many citizens as possible exercise their right to vote.

The turnout in referendums has often been poor. For instance, in 1983, when the proposal to insert the Eighth Amendment into the Constitution was put to the people, the turnout was just 53 per cent.

Turnout in referendums has regularly fallen below 50 per cent, but on an issue of this importance it is imperative that a substantial majority of people cast their votes so that the outcome will have the maximum level of democratic legitimacy.

There are almost 3.34 million voters on the electoral register for today’s referendum, almost one million more people than were entitled to vote in 1983.

The surge of people putting their names on the supplementary register in recent weeks indicates a welcome determination by voters to exercise their democratic right.

Polling stations will be open from 7am until 10 pm. Voters should have received a polling card in the post over the past week or so telling them at which polling station they should cast their vote. For convenience sake they should bring that card with them, but it is not a legal requirement.

People who are on the electoral register but have not received a polling card are still entitled to vote. Voters do not need to have their polling card when they go to the polling station but they do need to produce some valid form of personal identification such as a driving licence, a passport or public services card.

Those who still unsure about how they should vote should consult the independent guide on the website of the Referendum Commission for unbiased facts about the proposed change to the Constitution.

One problem that may confront voters today is that the ballot paper they will be presented with is badly designed and could even create confusion about how it is to be completed.

The ballot paper begins by asking people in Irish and English if the voter approves of the proposal to amend the Constitution as contained in the 36th Amendment to the Constitution Bill 2018. The ballot paper does not refer to the fundamental point of the Bill, which is to delete the constitutional provision which recognises an equal right to life to the mother and the unborn.

The poor design of the ballot paper and the mixture of Irish and English in the way the question is framed may cause confusion in the minds of some voters. People need to read the ballot paper carefully before marking an X in the Tá/Yes or Níl/No box.

1 Why are there so many angry dads?
2 David Trimble: After the big dinner in Oslo, somebody said why don’t we party together?
3 Coronavirus: Warning against blame game as 46 more cases are confirmed
4 Maureen Dowd: The US president and the damage done
5 John Hume, architect of peace process, dies aged 83
Real news has value SUBSCRIBE