The Irish Times view on Ebola: a worrying outbreak 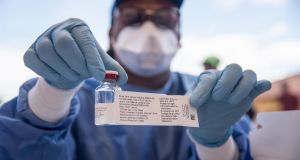 A nurse working with the World Health Organisation (WHO) shows a bottle containing Ebola vaccine in Mbandaka on Monday. The death toll in an outbreak of Ebola in the Democratic Republic of Congo (DRC) has risen to 26. Photograph: Junior Kannah/AFP/Getty Images

The deadly haemorrhagic virus Ebola has once again taken hold in sub-Saharan Africa. At least 45 cases have been reported in the Democratic Republic of Congo (DRC) since an outbreak began earlier this month, and 26 people have died.

Ebola infects humans through close contact with the blood and other bodily fluids of infected animals. More than 11,300 people died in an outbreak affecting a number of west African states in 2014-16. A vaccine has been developed since, leading the World Health Organisation (WHO) to express optimism that the latest outbreak can be contained. But Ebola has already spread from rural areas to the northwestern city of Mbandaka. Once it penetrates urban areas, where people and animals share cramped living quarters, the opportunity for disease transmission rises significantly.

Implementing the ring vaccination is a complex operation: vaccines need to be stored at a temperature of minus 60 to minus 80 degrees centigrade

The WHO was rightly criticised for a ponderous response to the 2014 outbreak. An international panel of 20 experts said the most egregious failure was the WHO’s delay in sounding the alarm early in the Ebola outbreak. But the DRC government, with the support of the WHO and others, has a new Ebola vaccine with which to tackle the latest outbreak. More than 7,500 doses have been deployed to the northwestern Equator province. A ring vaccination exercise, whereby the contacts of confirmed cases and the contacts of contacts are offered vaccination, began on Monday. Frontline healthcare workers and others with potential exposure to Ebola will also receive the vaccine.

However, implementing the ring vaccination is a complex operation: vaccines need to be stored at a temperature of minus 60 to minus 80 degrees centigrade, so transporting and storing them is a challenge. The as yet unlicensed vaccine was shown to be highly protective against Ebola in a major trial in 2015 in Guinea. Among the 5,837 people who received the vaccine, no Ebola cases were recorded nine days or more after vaccination. Trials indicate the new vaccine, which does not contain live Ebola virus, has a good safety profile. But significant logistical challenges remain.