The Irish Times view on the Judicial Appointments Bill: how not to enact a law 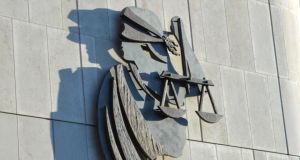 Judicial Appointments Bill: the political incompetence on display this week means the Seanad will have to try to rectify the contradictions that have been inserted in it. Photograph: Alan Betson

It was fitting that the Dáil debate on the Judicial Appointments Bill turned into a complete farce this week when TDs voted to accept contradictory amendments to its provisions.

From the start the Bill was a poorly conceived political fix designed to ensure the participation of Shane Ross in the minority Government. The latest developments have simply brought the legislation into further disrepute. The political incompetence on display this week means the Seanad will be given the task of trying to rectify the contradictions which have been inserted in the Bill.

At the heart of the problem is the fact that the Dáil voted to add three judicial members to the proposed Judicial Appointments Commission but then voted against increasing its membership to ensure the lay majority on which Ross insists. In effect it decided to appoint at least 16 people to the 13-person body.

Ceann Comhairle Seán Ó Fearghaíl was forced to suspend debate on the Bill on Tuesday evening to consider how to proceed. The following day Minister for Justice Charlie Flanagan announced he would bring forward amendments in the Seanad to iron out the contradictions in the Bill.

The positive aspect of all this is that at the very least it will further delay this flawed piece of legislation. The process of amendment in the Seanad could even take so long that the Bill might not make it back to the Dáil before the next election.

Flanagan has made valiant efforts to mitigate the worst effects of the legislation but it would be far better if the Government faced up to the fact that the Bill is simply not fit for purpose. The deal between the Government and Sinn Féin to get it through the Dáil reflects badly on all sides and simply exposes the deficiencies of the legislation.

There is certainly an argument for improving the way the current Judicial Appointments Advisory Board does its business. In particular, the process should be more open and the board should be obliged to send fewer names to government for consideration. However, the Ross-inspired Bill will do more harm than good and it will be welcome relief if it comes to naught.