The Irish Times view on a second Brexit referendum: When the facts change

Brexiteers prevailed in 2016 by peddling illusion the UK could leave EU and keep all its benefits. Now they face reality

October 20th, 2018: Thousands of protesters calling for a referendum on the final Brexit deal have marched in London. Organisers of the People's Vote campaign say the event is being attended by more than 500,000 demonstrators. Video: Reuters 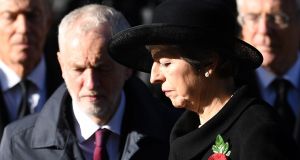 British prime minister Theresa May and Labour leader Jeremy Corbyn at an Armistice Day remembrance ceremony in London: May’s cabinet is still hopelessly divided on Brexit, while Corbyn appears to have almost no interest in what is the defining issue of his time. Photograph: Andy Rain/EPA

The apparent failure to find a breakthrough in Brexit talks between the EU and the UK today imperils plans for a special EU summit this month. A deal could conceivably be signed off on at a scheduled summit in mid-December, but that would leave very little time for British parliament to ratify an agreement. The upshot is that, with the UK due to leave the EU at 11pm on March 29th and another important milestone set to be missed, the chances of a chaotic no-deal departure are dangerously high.

If a solution hinged solely on agreement between London and Brussels, there would be more grounds for optimism. Far more fraught, however, are the parallel talks within the British government itself. Thirty months on from the Brexit referendum, Theresa May’s cabinet is still hopelessly divided, paralysed by the knowledge that to accept what has always been inevitable – an outcome that is worse for Britain than the status quo – could cause the administration to implode.

For ardent Remainers, the resignation of transport minister Jo Johnson last week was an important fillip. May has lost influential Leavers from her cabinet, but Johnson’s departure, accompanied by a call for a second plebiscite, was the first defection by a pro-European in the ranks. That augurs badly for May’s chances of winning a parliamentary vote on a deal, given that the support of the DUP and hardline Brexiteers is already shaky. The political crisis caused by a parliamentary rejection would raise the likelihood of another referendum, Remainers believe, especially given that Labour and an increasing number of Conservative MPs baulk at a no-deal scenario.

In a properly-functioning parliament, the Opposition would use its leverage to act in the public interest on Brexit. That would be served by putting May under real pressure to secure the softest possible exit while holding out the possibility of going back to the people.

Tragically, however, Labour leader Jeremy Corbyn appears to have almost no interest in the defining issue of his time. Whatever pressure May is coming under originates in her own party, not the opposition benches. When Corbyn does intervene, he only adds to the confusion. At the weekend, the Labour leader responded to a question about a second referendum by saying that Brexit could not be stopped – prompting a number of his front benchers to contradict him by recalling the party’s position of keeping open the option of a “people’s vote”.

The Brexiteers prevailed in 2016 by peddling the illusion that the UK could leave the EU while continuing to enjoy all its benefits. Now they face the reality: a deal that will satisfy nobody and leave everybody worse off. “When the facts change, I change my mind,” said Keynes. In this case, the “facts” never were facts at all. A second referendum would not affront democracy; it would shore it up.