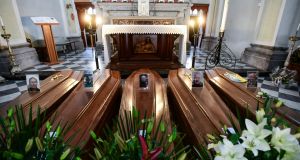 Coffins of coronavirus victims in a church in Serina, near Bergamo, northern Italy, at the height of the outbreak there in March. Even after more than half-a-million deaths worldwide and a very approximate infection of more than 11 million people, we are still only guessing at the exact death rate. Photograph: Piero Cruciatti/Getty Images

Exactly how deadly is coronavirus? Even after over half a million deaths worldwide, and a very approximate infection of more than 11 million people, we are still only guessing. In every country the attrition rates of infection differ, the testing rate is different, the absolute death toll rising and declining with time. And the death rates per million are deeply imperfect measures of national success, providing only the roughest of comparative measures

There are at least three different version of death rates: coronavirus deaths per million of population (Ireland at 353, ranked 11th in world league); the case fatality rate (CFR) which measures deaths among patients known to have had Covid-19 (Ireland 7 per cent, UK 14 per cent); and the most intangible, the infection fatality rate (IFR), measuring the lethality of the disease, the rate of deaths among those who actually catch it.

The latter has been variously estimated from 0.5 per cent to as much as 10 per cent – a comparative study for the WHO plumps for 0.64 per cent – with all agreed that the lethality varies widely and depends crucially on local conditions. Death rates are expected to be lower in countries with younger populations and less obesity, which are often the poorest countries.

The wide discrepancy between the CFR and IFR estimates reflects the huge difficulty in establishing the real numbers who are, or have been, infected and the scale of asymptomatic infection, the wide variation in the scope of testing regimes, and the likely misidentification of deaths attributed to Covid-19. According to one survey, the number of detected cases in the US could underestimate the true number of infected people by anywhere from a multiple of two times to 100 times.

That reality was reflected in a HIQA study looking at the difference between current reported deaths here and the “expected death rate” calculated from historic data – how many would have died without a pandemic? According to HIQA Ireland’s coronavirus death toll of over 1,700 is overestimated by in the region of 600 cases. But all such analysis remains a work in progress.